The U.S. has officially withdrawn from the Paris Agreement, becoming the first state to ever leave the global climate agreement, which aims to keep the global temperature rise this century well below 2°C above pre-industrial levels[1].

President Trump decided to leave the Paris Agreement as he believed the obligations were a financial and economic burden that were bad for the American people. He also believed that the U.S received unfair treatment when compared to leading polluters like China and India which have lesser commitments.

When announcing the withdrawal back in 2017, he claimed: “The cost to the economy at this time would be close to $3 trillion in lost GDP and 6.5 million industrial jobs, while households would have $7,000 less income and, in many cases, much worse than that”[2].  Yet, this prediction doesn’t seem to consider the huge economic long-term cost of allowing the climate crisis to go unchecked, which is predicted to cost hundreds of billions of dollars by the end of the century[3].

It is also worth noting that Trump and his Republican colleagues are intricately linked to traditional energy resources and have been publicly sceptical about the transition to renewable energy resources. A survey undertaken by The Guardian concluded that the 22 Republican senators that signed an open letter to Trump urging him to withdraw from the Paris Agreement received more than $10m from oil, gas, and coal companies the past three election cycles[4].

The U.S. left the Paris Agreement the day after the historic 2020 presidential election, which eventually saw Joe Biden take the White House after over four days of controversy and uncertainty. This is significant because the then former Vice President declared that the U.S. would re-join the Paris Agreement if he were to get into office – see the tweet below[5]: 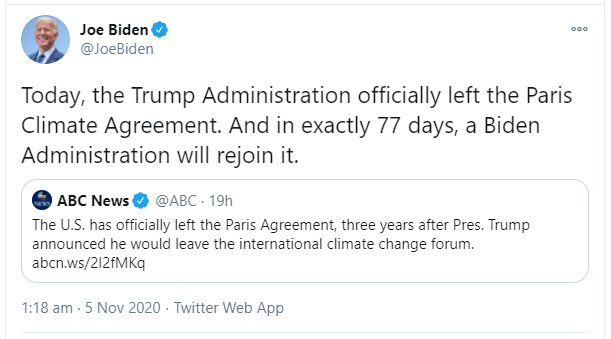 Although the process of re-joining the accord will be relatively simple, the U.S. is likely to have lost a lot of geopolitical influence when it comes to the global fight on climate change. Since China’s recent pledge to reach net-zero emissions by 2060 – read the article here – we can expect that China and the European Union will position themselves as the political leaders on this issue.

It is inevitable that the U.S. will re-join the Paris Agreement on President-elect Biden’s first day in office, demonstrating the contrasting stance that the new administration will take when it comes to climate change. Although this will likely be the first climate policy to be changed by Biden, it most certainly won’t be the last.

Have Yourself a Merry Little Eco-friendly Christmas