Since writing this article we’ve created an updated version. Click here to read volume 2 for 2019.

Solar energy projects form part of the renewable energy landscape in numerous countries around the world. Solar developments are operational and/or on the agenda in Europe, China, Australia, the USA and South America. 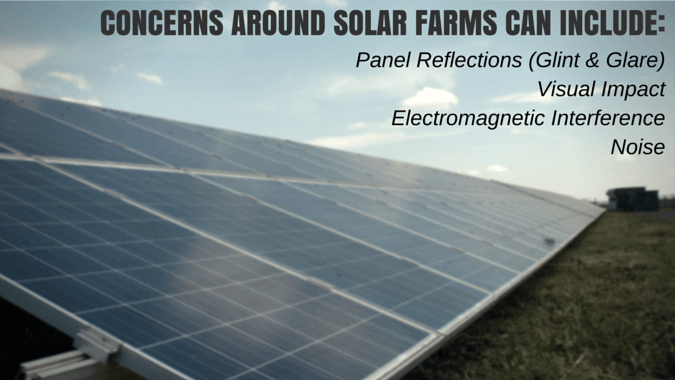 Like any proposed structure, concerns can be raised over the visual impact a solar development will have on its surroundings. This is particularly an issue if the location is in some way protected, for example a Conservation Area or an Area of Outstanding National Beauty (AONB).

Assessment of the visual impact and careful planning of the panel locations and any required shielding is highly advisable at the scoping stage of a development.

Panel reflection is possibly the most common safety concern raised for solar developments, and is commonly referred to as ‘glint and glare’ concerns. Solar panels are designed to absorb as much light as possible and reflect as little as possible. Many modern panels are ‘anti-glare’ to minimise reflections further.

However, 100% absorption is not achieved and some level of solar reflection will always occur. Concerns can be raised by residents, airports, councils and other stakeholders. Regarding residents, the concern is generally that reflections will cause a discomfort or a nuisance. For aviators and drivers it can be a safety concern.

The good news is that the reflections behave predictably – because they are dependent on the position of the sun and the angle of the panels, two factors that can be accurately quantified. It is good practice to undertake detailed study of the potential glint and glare impacts for a proposed development.

Download our glint and glare guidance document which includes a standardised methodology for PV developers, planners and stakeholders to follow.

All electronic equipment has associated electromagnetic fields. In some cases, electronic devices that are in close proximity to one another can encounter interference as a result of these fields. Commercial equipment such as solar panels are generally subject to limits that determine the maximum allowable emissions limits [3].

In cases where a proposed solar development is located within close proximity to sensitive sites such as transmitting stations, concerns over electromagnetic interference can be raised. In such cases detailed assessment can be required. This is relatively unusual and impacts in the wider area are generally not an issue.

Concerns over noise can be expressed for a solar development. This issue is more pertinent for other technologies such as wind farms, which are noisier than solar farms. Any issues would most likely be constrained to locations in very close proximity to the inverters, but in practice this is not a big issue for solar developments.

Have you encountered other concerns that have been raised from a solar farm proposal, and we haven’t mentioned? We’d love to know.