Glint & Glare vs Shadow Flicker: Is there enough planning guidance for solar reflections?

Glint & Glare vs Shadow Flicker: Is there enough planning guidance for solar reflections?

Solar parks and wind farms are an attractive investment in the UK and around the world. Both can cause visual effects that may be of concern to planning authorities, and could hinder project development. For wind turbines this is in the form of Shadow Flicker. It can occur when the sun passes opposite a wind turbine producing a shadow over neighbouring properties that flicks on and off as the blades rotate [1]. The visual effects of solar parks are often described as Glint and Glare.  Glint is described as a momentary flash of reflected sunlight whilst Glare is a continuous source of reflected bright light.

Since nations have been developing commercial wind turbines for a longer time, Shadow Flicker has been researched and documented. Consequently, planning guidelines on how to minimise the unwanted effects have been created in many countries. This is not the case for Glint and Glare. As a result there is a creation of uncertainty for investors and developers.

In the table below we have made an initial comparison between the current status (Summer 2014) of guidelines between Shadow Flicker and Glint and Glare.

Main points to note are:

Solar Parks vs Onshore Wind Farms: The Future for the UK

Based on statistical data from the Department of Energy and Climate Change and RenewableUK Solar Farms are likely to significantly increase in the next few years both in numbers and capacity.

Interestingly, the number of Solar Parks under construction is 4.5 times that of Wind Farms under construction. This means that Glint and Glare concerns are likely to increase and without documented guidelines, more responsibility lies on the developer experience. 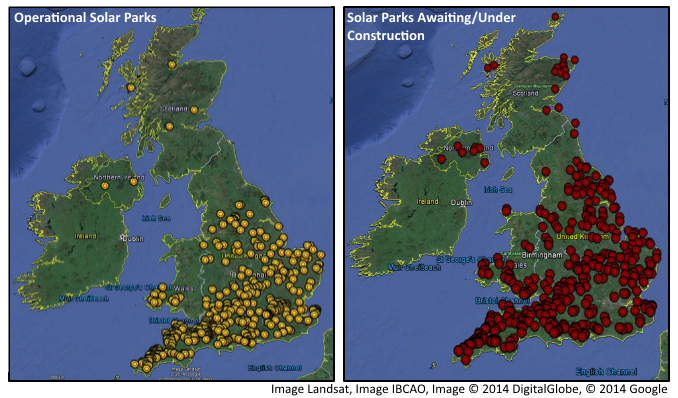 The number and size of Solar Farms and Wind Farms in the UK is likely to significantly increase in the next few years. Even though there are currently no standard guidelines for assessing the effects of Glint and Glare on the surrounding environment, this is likely to change as time goes on.

The best advice we can give for the time being is to have a site assessed for potential issues early on. From our experience, the earlier an assessment is carried out, the easier it is for any identified issues to be resolved.