The development of large scale wind and solar developments throughout the world means that new overhead transmission lines are sometimes routed near existing civil and military airbases which can result in  aerodrome safeguarding objections due to collision risk or the potential impact on radio and electronic navigation aids.

Pager Power recently undertook a safeguarding assessment for a proposed new transmission line in the vicinity of a military airbase in Africa[1]. The diagram below shows the runway, a 4 nautical mile radius around the base and the proposed transmission line route. The spacing between gridlines is 1 kilometre. 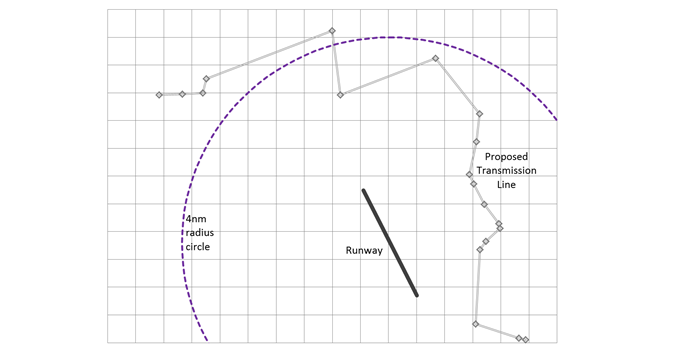 The project developer explained that the military authorities were objecting to the proposed transmission line because it passed within 4 nautical miles[2] of their largest airbase with the lines presenting a potential collision risk to fixed wing aircraft and helicopters using the base.

Details of the transmission line route were provided together with details of the maximum height which was a relatively low 25 metres (approximately 82 feet) above ground level.

It was decided to assess the development using three different methodologies which were:

Coordinates, height and ground elevation data was obtained for each transmission tower. Runway threshold location and elevation data was also obtained. This data was then entered into Pager Power’s online system which produced a detailed obstacle assessment that showing results both graphically and in a tabular format.

Construction in the vicinity of a civil or military airport needs to be managed so that the risk of aircraft colliding with buildings and structures is minimized. This is achieved using imaginary surfaces around the airport. If the highest point of a structure is higher than one of these imaginary surfaces then it may be a risk to air navigation.

In this particular case some towers on high ground away from the runway approaches breached a safeguarding surface known as the Inner Horizontal Surface. Other assessed surfaces, which were not affected, include the Conical Surface, Approach Surfaces, Transitional Surfaces and Take Off Climb Surfaces.

The view from the cockpit was simulated for a pilot flying a standard approach to each runway. A number of views were created at different ranges and approach angles. One of the views is reproduced below. 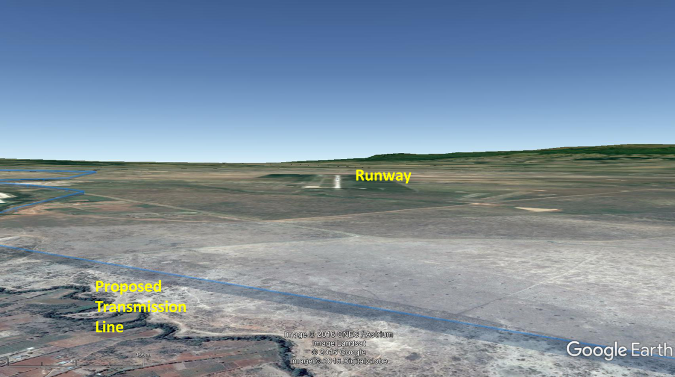 Figure 3: A view from the cockpit

An in-depth study was undertaken into transmission lines at Joint Helicopter Command (JHC) Wattisham, in England, which has a long runway and is base to Apache and other helicopters. The chart below shows existing transmission lines in the vicinity of Wattisham. 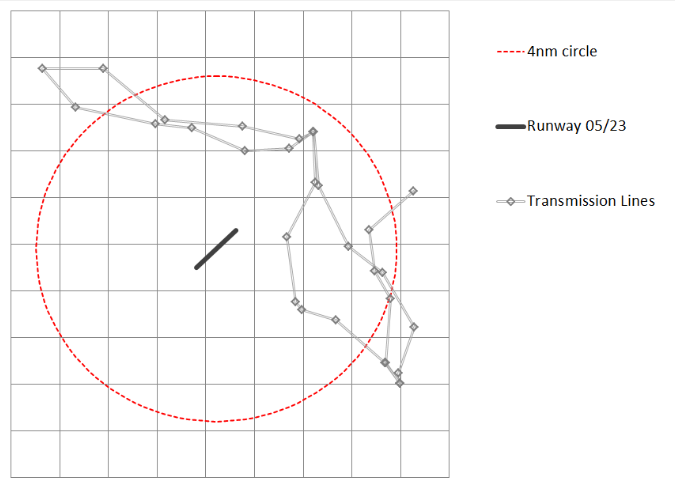 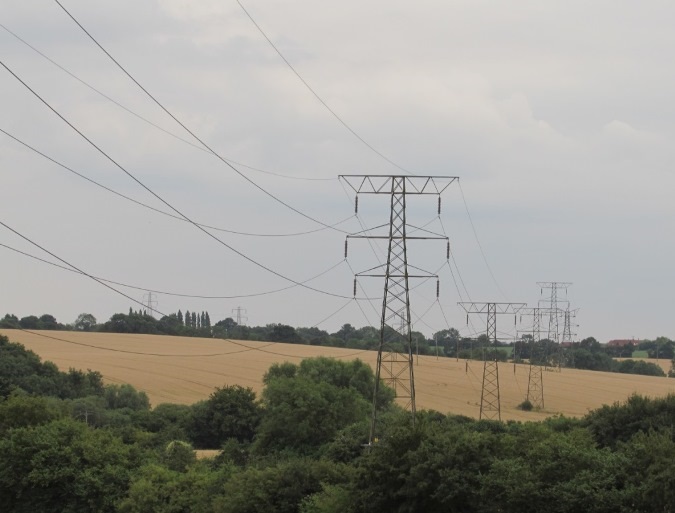 The assessment showed that some transmission towers away from the approaches to the runway constituted obstacles because they breached the Inner Horizontal Surface.

The pilot’s eye view images showed that the transmission line would not affect aircraft flying standard approaches to the runway.

The UK military airbase research showed that there are many airbases with transmission lines within 4 nautical miles of the airbase.

The Pager Power assessment is being used to support ongoing government discussions between the transmission line operator and the defence ministry.