Plans for building developments can, and do, receive objections from airports. Invariably, these relate to flight safety, which gives the objection a loud voice in the ear of the planning authority. This article presents an overview of what to expect and what to do for some of the more common concerns.

Structures around airports have the potential to present a collision hazard. In order to manage this risk, airports typically require physical safeguarding assessments for proposed obstructions in their vicinity. Usually these assessments will consider the structure against a series of imaginary surfaces that extend in three dimensions from the airport’s runways. In the United Kingdom, these surfaces are defined within the UK Civil Aviation Publication ‘CAP 168 – Licensing of Aerodromes’ (more information can be found here or on the CAA’s website). This method of physical safeguarding is based on the International Civil Aviation Organisation (ICAO) guidance and is adopted by many authorities around the world.

The figure below shows a hypothetical obstruction located beneath the Outer Horizontal Surface at Gatwick Airport. 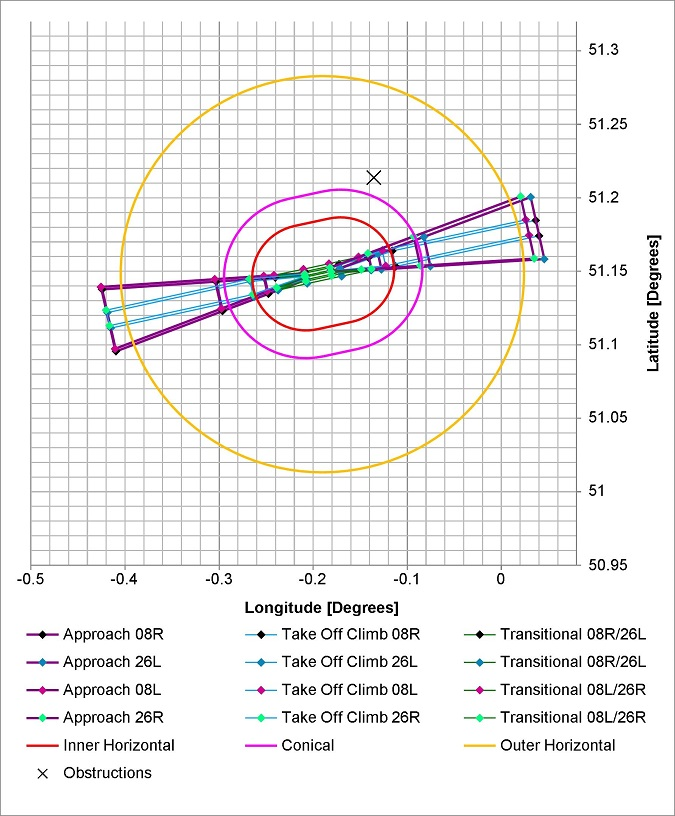 Large buildings that are close to an airport have a greater chance of receiving an objection than obstructions at greater distances. Distance alone is not the only factor. The building location relative to the runway alignment, for example, comes into play but broadly speaking concerns diminish with distance.

At distances of around 20 km, any development will be clear of the Obstacle Limitation Surfaces and concerns over collision risk become much less likely.

Radar is used by airports and air navigation service providers (ANSPs) to monitor air traffic over large distances in all weather conditions. 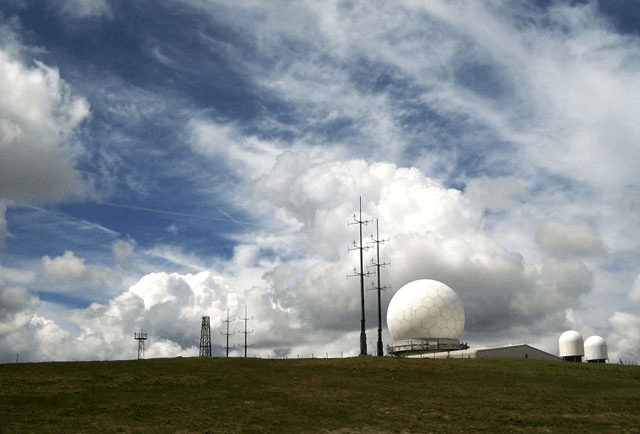 There are many kinds of radar, however all of them work by emitting electromagnetic signals, which are returned via an aircraft [1]. Large buildings near radar systems can cause interference by blocking or reflecting the inbound and/or outbound radar signals.

Objections to building developments can be received from radar operators. Such objections are more likely for developments within 20 km of a radar system, however there is no formal limit.

More information regarding radar interference from buildings can be found here.

Airports operate a variety of other navigation aids, such as Instrument Landing Systems and radio beacons. A review of all these systems and associated impacts of buildings is not presented here. Suffice it to say that building developments within a few kilometres of airports may well receive an objection due to potential interference with radio navigation aids.

Individual cases must be assessed on their merits. There is no ‘catch all’ solution for airports that object to buildings. However, in general terms, solutions often include:

It is worth establishing early on what the potential aviation constraints might be. Developers should establish whether:

Where potential concerns are identified, consultation with the relevant stakeholders should be progressed.

If an objection is received, a detailed assessment to quantify the potential impact should be undertaken.

If an operationally significant impact is predicted, mitigation options can be explored.

Pager Power has experience in assessing and resolving aviation concerns with buildings. If you have a project that is being affected by similar concerns, then call +44 (0) 1787 319001 and speak with Pager Power’s technical team to receive a proposal.