A new full length runway is planned to the North West of Heathrow, between the existing northerly runway and the M4 Motorway. We have considered how this new runway will impact the development of tall buildings and structures in the area. This is because the height of buildings and structures on and around airports is restricted to ensure the safety of aircraft.

A variety of options for expanding the airport have been considered and debated over the years. It seems likely that the Airport Commission’s recommended option of a new full-length runway to the north west of the existing airport will eventually be developed.

The airport’s two existing runways are already safeguarded with the height of buildings and structures generally being limited so as not to breach Obstacle Limitation Surfaces (OLS) associated with the existing runways. The airport’s radar is also safeguarded against the potential effects of reflections and shadowing caused by tall buildings around the airport and central London. 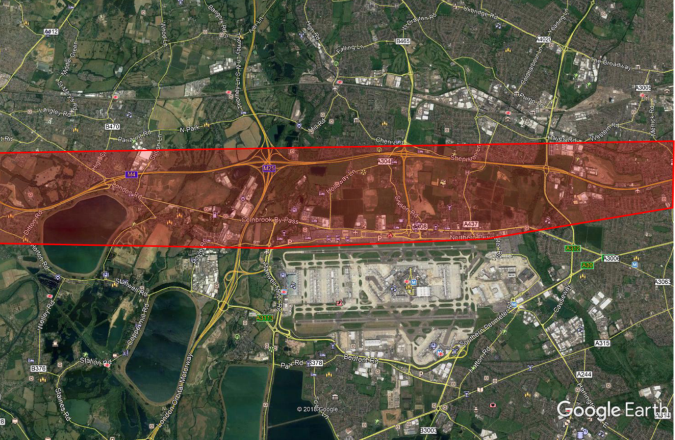 Once established the new runway is likely to reduce the maximum permissible heights of buildings and structures in an elongated zone centred on the new runway. The approximate area affected is shown on the map above – although for taller developments the area will extend beyond the area shown.

There are also likely to be restrictions on what types of new development are permissible in triangular Public Safety Zones at either end of the new runway.

Formal safeguarding restrictions are likely to apply once formal planning permission for the third runway is granted.

For any developments that are likely to receive planning determinations after the third runway receives planning permission it is recommended that a safeguarding assessment is undertaken to determine whether a future third runway safeguarding objection is likely.

Pager Power is able to undertake these safeguarding assessments if required. For more information please contact Mike Watson on 01787 319001.