In years past, Noam Chomsky, a world-renowned American linguist and political activist, has emphasised that the two greatest existential threats posed to human civilisation[1] are Nuclear War and Environmental Catastrophe. Whilst Bill Gates, in years previous to the COVID pandemic[2], highlighted the lack of preparation for a global pandemic as one of the most significant risks posed. Recent events surrounding the COVID pandemic have resulted in significant changes to the status quo of day to day life. One of the positives that may come from the COVID pandemic is greater investment in preparation should a more significant pandemic come to realisation.

Unfortunately, most countries are still failing to take climate action seriously[3] despite temperature goals set at the Paris Climate agreement[4]. More recently, a solution to the current climate crisis has been proposed in the form of the Green New Deal, with notable politicians in America supporting it, such as Alexandria Ocasio-Cortez (AOC) and Bernie Sanders[5]. Meanwhile, Noam Chomsky and Robert Pollin (American economist and advocate of the Green New Deal) have collaborated on a book entitled ‘Climate Crisis and the Global Green New Deal’[6] which highlights the key causes of climate change; the relationship between capitalism and climate change; and the key components needed for a Green New Deal. 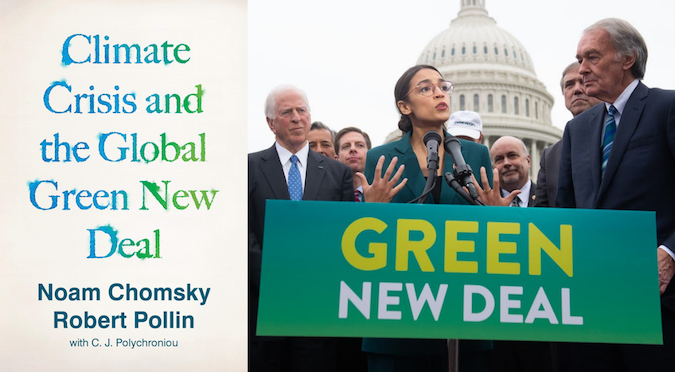 The Green New Deal is a public policy proposal born from the idea of The New Deal of the 1930’s and Keynesian economics to achieve economic growth. The New Deal was a series of public infrastructure investments and financial reforms enacted by Franlin D. Roosevelt between 1933 and 1939 following the economic fall in activity (known as the Great Depression of the 1930’s) following the stock market crash of 1929 (Black Tuesday). The Green New Deal, in spirit of the New Deal, seeks to address climate change via economic reform partly in the form of investments in renewable infrastructure and jobs.

‘Climate Crisis and the Global Green New Deal’ highlights that a green new deal should seek to tackle climate change through job creation and opposes the idea of a no or anti-growth economy to tackle climate change. For those that doubt the risk posed or the very existence of climate change, the authors seek to address this by indicating that the climate crisis can be viewed as an economic risk. Actions to tackle climate change could be seen as an insurance policy e.g. if a significant meteor were to be heading towards earth, even with as low as a 5% risk of collision, actions would likely be taken to try and prevent such an event.

The IPCC estimates that to achieve a maximum mean global temperature increase target of 1.5c as of 2100, global net Co2 emissions will have to fall by about 45% as of 2030 and reach net zero emissions by 2050[7]. Robert Pollin states that a Green New Deal should seek to accomplish this whilst expanding job opportunities and raising living standards for working people and the poor throughout the world. Robert Pollin estimates (at the higher end) to achieve such targets investment spending of 2.5% of global GDP per year will be required in the form of: renewables; improving efficiency of production processes and transportation; stopping deforestation; and supporting afforestation. The total investment spending estimated would amount to about 120 trillion dollars[8]. These estimates are for overall investment spending, including both private and public sectors, with a 50/50 split being ideal. As of 2018, Credit Suisse estimates that the total value of global assets is 317 trillion dollars , therefore, an investment of 2.4 trillion of clean energy investment per year that Robert Pollin proposes amounts to 0.7% of these assets. Also highlighted in the book is the need to change industrial agriculture, especially reducing the consumption of beef.

Robert Pollin proposes four primary investment sources for a green new deal: a carbon tax; transferring funds out of military budgets; a green bond lending program (primarily through the US federal reserve and European Central Bank); and the elimination of fossil fuel subsidies and the transfer of 25% of those funds into clean energy investments. Each of these are potentially restricted by political feasibility and public support; however, of these a carbon tax is considered by most mainstream economists to be the most effective (if not the only) intervention in tackling climate change: “A sufficiently robust and gradually rising carbon tax will replace the need for various carbon regulations that are less efficient. Substituting a price signal for cumbersome regulations will promote economic growth and provide the regulatory certainty companies need for long-term investment in clean-energy alternatives.”[9]

A clear roadpath for a green deal has been stated in a concise and clear book by Noam Chomsky and Robert Pollin[10]. However, for a green new deal to be enacted globally, it may require wealthier nations to provide financial support to developing nations to enact the necessary changes to fight climate change which may pose a significant political challenge. Calls have been made for the Green New Deal to be included in recovery programs from the reduced economic activity as a result of the COVID pandemic[11]. The election of Joe Biden will be seen as a positive by many following the return of the US to the Paris climate accord[12] in opposition to the Trump administrations disregard for climate concern[13]. However, many will still be sceptical as to how far the new administration will go to tackle climate change including UN secretary general António Guterres who stated that the world’s governments were ‘doubling down’ on fossil fuels[14] during the COVID pandemic in 2020.

The importance of the “Better Business Act”