Wind turbines can have a negative impact upon radar activity. As shown in the figure below wind turbines can show up on radars as storms. Their interference can be categorised in three different types: emission, blocking and reflection. However, two new technologies can mitigate such issues: ADS-B and Multilateration. Implementing such technologies might solve some of the issues generated by wind turbines and enable deployment in restricted areas. 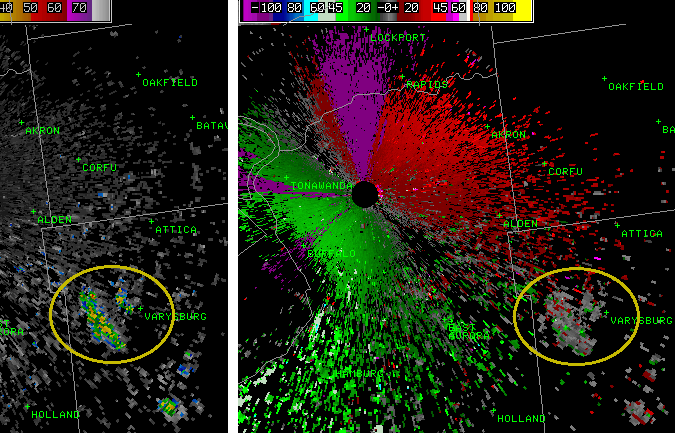 ADS-B is a surveillance system which permits transponder enabled aircrafts to automatically broadcast information (aircraft ID, altitude, velocity and other data) to air traffic control, satellites and to other aircraft if the system is fully equipped. Information are broadcasted each second.

Multilateration is a technology that uses the method of time difference of arrival (TDOA), between the signal broadcasted by the aircraft and received by stations on the ground, to determine the location of an aircraft. This system requires at least three receptors to receive the message and calculate the location of the aircraft. More receptors will lead to better accuracy.

EUROCONTROL stated in “Guidelines for Assessing the Potential Impact of Wind Turbines on Surveillance Sensors” that ADS-B can be used to mitigate the issue of wind turbine interference. Implementing ADS-B can help mitigate the issues related to secondary surveillance radar (SSR), examples of impacts that can be mitigated by utilising ADS-B are:

All electronic equipment, including on wind turbines, generate magnetic and electric fields. Such equipment can interfere with radar resulting in operational issues. This interference phenomenon is called emission.

ADS-B sends a message which carries the aircraft information therefore any other signal without such information will be not processed by the receiver. In general, such magnetic and electric fields have a low magnitude and do not lead to problems. Therefore, no issue upon ADS-B signals has been identified. This will be also the case for Multilateration systems.

Radio transmission can be blocked by physical structures such as wind turbines. However, in a real world scenario, the signal is mainly weakened and not fully blocked.

With regards of ADS-B, signal blockage will be occasional and it will not represent a significant problem because:

In regards of Multilateration, blocking or weakening will not lead to a significant impact because:

Radar signals can be reflected by wind turbines, this is due to their considerable size which is often greater compared to the size of radars’ targets. Additionally, radars can detect wind turbines’ rotating blades which generate a Doppler shift.

Impact upon ADS-B is possible. However, despite the fact that messages can be received at the wrong time or location, it will not result in a significant problem since: