South Africa’s national rail network extends to more than 20,000 kilometres which is mostly used for freight traffic by the national operator Transnet Freight Rail (TFR). Radio communications between the National Command Centre at Parktown and train drivers, across the nation, are necessary to operate the network safely and efficiently. 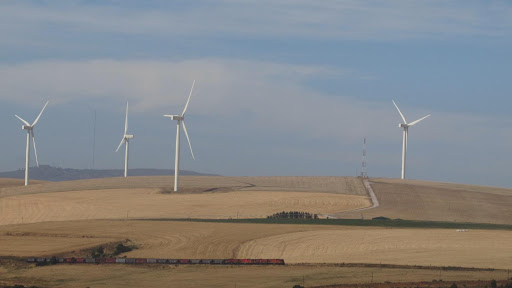 Wind turbines are large and can adversely affect radio systems including voice communications systems, radar and telescopes such as the SKA in Northern Cape. Specifically UHF (Ultra High Frequency) systems can be affected when there is no line of sight between transmitter and receiver.

Generally three interference mechanisms are considered when assessing wind farm radio interaction. These are emissions; shadowing and reflections. Emissions are relatively weak electromagnetic signals that are emitted from the turbines’ generators, inverters, transformers, wiring and control systems. Shadowing weakens signals between transmitter and receiver by physically blocking them whilst moving wind turbine blades can reflect radio signals. At any instant the position and speed of a wind turbine blade is variable and depends on wind speed and direction – meaning that reflections caused by the blades are similarly variable.

In order to safeguard its operation Transnet requires an assessment of proposed wind farms in the vicinity of its railway lines so as to ensure that radio communications and train operations will not be adversely affected. Pager Power undertakes Telecommunications Impact Assessments for wind farm developers so that they can demonstrate the likely impact of their proposed developments on Transnet’s radio systems.

In order to model the impact of a particular wind farm on Transnet’s systems the following information is required:

Full impact assessments include an examination of radio interference mechanisms; analysis of potential interference including an assessment of coverage and calculation of Carrier to Interference Ratio (CIR) on relevant sections of line. For wind farms cumulative assessments may be undertaken to account for the effects of multiple wind turbines.