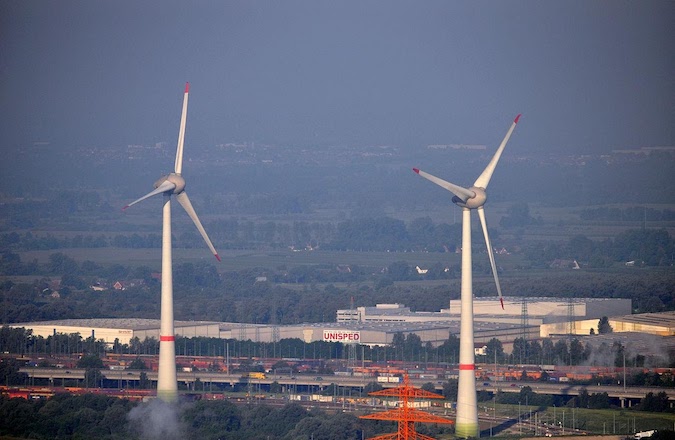 The turbines are Enercon E126s which each have a rated electrical output of 6 Megawatts providing enough energy annually to supply around 11,500 German homes. The turbines have a rotor diameter of 126 metres and a maximum height of 198.5 metres above ground level.

Hamburg Airport has two runways and handles over 17 million international passengers a year and is located to the north of the city. The aerial photograph below shows the airport and surrounding wind developments marked with blue icons. Altenwerder can be seen south of the river and west of the harbour area. 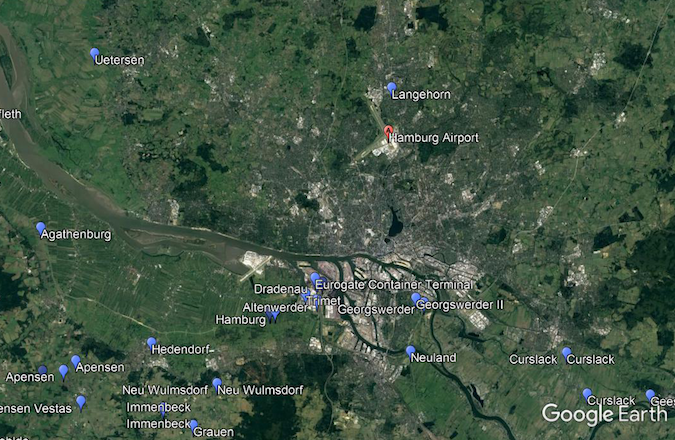 There are many wind farms in Hamburg in the vicinity of the airport.

The Altenwerder wind development consisting of 2 turbines has been considered. These turbines have a maximum height of 198.5 metres and lie to the southeast  of the approach to runway 05. The nearest turbine is 11.8 kilometres (6.4nm) from the airport boundary and 14.4km (7.8nm) from the radar.

Analysis of the airport’s obstacle limitation surfaces shows that the Altenwerder turbines are horizontally clear of the standard ICAO Obstacle Limitation Surfaces (OLS).

The Altenwerder wind turbines are likely to be within radar line of sight as are the other wind farms in the vicinity.

The situation at Hamburg demonstrates that wind farms and airports can safely co-exist.

Pager Power helps developers of renewable projects particularly those that are on or near airports. We undertake radar impact assessments for wind turbines and solar glint and glare assessments for solar PV developments. For more information please contacts us on +44 1787 319001.