It is often difficult to get permission to build wind farms due to the effects they are predicted to have on radar installations. This problem is growing dramatically in France having parallels with the situation in the UK around ten years ago.

What is happening in France now?

Government policy is supportive of renewable energy with electricity market conditions favourable towards onshore wind developments. Radar operators are objecting to proposed wind developments with most arising due to potential impacts on defence or meteorological radar. Furthermore the DEMPÈRE project for assessing wind farm radar interference on French military radar threatens to increase the likelihood of a military radar objection.

In the past developers would not have pursued sites with these objections – they would have simply moved on to an alternative development. However the number of developers and the demand for good wind farm sites is increasing whilst the supply of sites is decreasing. The number of objections to wind farm radar interference in France is likely to increase substantially in the coming years if nothing is done. 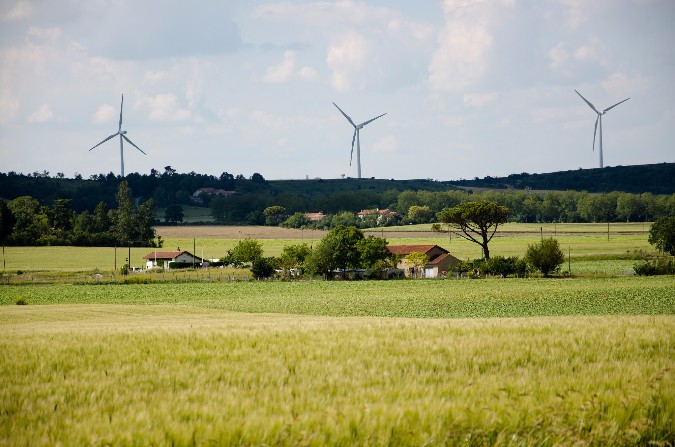 A wind farm in France.

What are the parallels with the UK ten years ago?

The situation is similar for the following reasons: (1) The government strongly supported onshore wind; (2) There were good market incentives for onshore wind development; (3) There was a very competitive market for wind farm sites; (4) The maximum distance at which radar operators objected increased following wind farm radar interference research and flight trials from the Ministry of Defence; (5) There was a large increase objections to wind farms due to radar.

How did the UK wind industry manage this issue?

The issue was addressed in a number of ways:

“There is no silver bullet!” was frequently heard in discussions regarding technical mitigation.

How was Pager Power involved?

Pager Power has worked on around a quarter of wind developments now operational in the UK helping wind developers resolve wind farm radar interference issues. The company undertook its first assessment in 2002 and continues to help UK wind developers resolve these issues now. This work has typically involved assessing impact, mitigating impact and negotiation with the radar operator. It can also involve providing expert evidence at wind farm public inquiries.

What advice does Pager Power have for French wind developers based on UK experience?

There always seems to be something to wait for – a flight trial to be flown – a report to be written – a minister to approve something – a technical mitigation solution to be tested. Wind farm developers and radar operators alike were guilty of waiting and hoping rather than finding another way forward.

Radar operators have to accept a degree of negative impact. If there position is simply one of “no” impact then there will be insufficient wind development. Wind turbines and radar can and do co-exist.

Do Not Rely on Promised solutions

There is always a new solution just waiting to be developed or tested. There is often a reason that it will not be acceptable – which is usually discovered far too late.

A lot of computer modelling of wind farm effects over-predicts the real effects on an operational radar screen which can result in excessive refusals by radar operators. If a radar operator objects to a wind farm it should be obliged to disclose evidence of actual technical and operational impacts to wind farm developers. Safeguarding processes should be transparent.

It is very easy for radar operators to refuse wind developments if they cannot be held to account. There needs to be a fair system that allows them to defend their objections whilst enabling developers to challenge them.

If you have a wind farm radar issue in France, contact us to discuss the concern and we’ll do our best to help you:.

Image accreditation: eolienne by harmishhk via flickr / CC BY 2.0 / Image resized from original.