Wind turbines can interfere with radio systems by blocking and reflecting radio signals. France has 96 VHF omnirange radio (VOR) beacons which aircraft pilots use for navigation.

Interference concerns to a range of 15 kilometres mean that hundreds of wind turbines cannot be permitted. Upgrading or decommissioning the VOR can clear the way to a successful wind project. 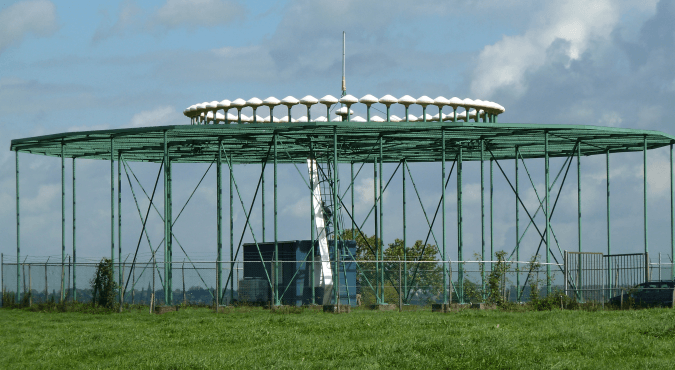 Pilots have many ways of navigating including visually, using GPS and using ground-based radio navigation aids such as VOR.

Pilots have instruments that they tune into specific VORs so that they can fly a specific track from it. Other ground based radio navigation beacons are:

Some of this equipment is being phased out as alternative GPS based navigation systems become available.

There are two different types of VOR:

Both are received in the same way so pilots are unaware of whether they are using a CVOR or a DVOR. The differences can be important when considering potential interference issues. The table below sets out the main differences between the two technologies:

Reflections from a wind farm can be complex due to the fact that the wind turbines are rotating in an unsynchronized fashion with many degrees of movement.

Guidance on developing wind turbines in range of VOR beacons is provided by the European and North Atlantic Office (Paris) of the International Civil Aviation Organisation (ICAO). The specific document is EUR DOC 015 which provides guidance for general development and wind turbines in the vicinity of VOR beacons. This guidance is in the form of Building Restricted Areas (BRA).

The guidance states that general development within 3km of VOR beacons may require assessment along with wind turbines within 15km.

France is understood to have 96 VOR of which 66 are conventional (CVOR) and 30 are Doppler (DVOR). Some have a particularly long range, with the St Tropez VOR having a range of 200 nautical miles to the south. VOR in France are safeguarded by Dirección General de Aeronáutica Civil (DGAC).

Planned wind developments within 15km of VOR are being objected to and consequently prevented although there are some circumstances where developments may be permitted including:

Whilst VOR technology is relatively old there is as yet no universally accepted method of accurately predicting the impacts of a specific wind farm on a specific VOR installation. In practice it is likely that the actual wind turbine impacts may be less than predicted impacts because:

In practice mitigation techniques for placing wind turbines in the vicinity of VOR include:

Have you ever had any problems with VOR and wind farms? Let us know.