The Supreme Court of the United States of America has changed in recent years. In theory, political persuasions should not affect judicial decision-making; however, it is evidentiary that the choice of justices can significantly affect decisions made over what is lawful in the future.

The last three of four new justices were chosen by former President Donald J. Trump. In effect, this means that only three of the nine supreme court justices were chosen by Democratic presidents, with the remaining six having been chosen by Republican presidents. This is in part due to the death of Ruth Bader Ginsberg ‘RBG’, a prominent liberal supreme court justice (with her career notably documented in the self-titled documentary ‘RGB’ [1]), who was replaced by the conservative justice Amy Coney Barrett. RGB notably stated in a New York Times interview in 2009, “the basic thing is that the government has no business making that choice for a woman” [2].

As a result of changes to the Supreme Court, the most notable effect occurred on the 24th of June 2022 with the overruling of Roe vs. Wade (1973) which allowed for many federal abortion rights [3]. More recently, on the 30th of June 2022, in West Virginia vs. EPA (Environmental Protection Agency) the supreme court rule 6-3 in favour of West Virginia (and 19 other predominately conservative states) [4]. The ruling was related to the Clean Power Plan (Obama Administration) that sought to cut emissions from coal power plants which was never enacted. Nevertheless, the ruling limits the EPA’s ability to regulate to tackle climate change and in effect limits President Joe Biden’s climate agenda.

The election of Joe Biden was seen by many to be significant for tackling climate change. In January of 2021, Joe Biden reinstated the US (United States of America) to the 2015 Paris Climate Accord. This move was in response to the decision of former President Donald Trump in June 2017 to remove US participation in this significant international agreement.

It has not been all plain sailing though, due in part to the recent decision of a conservative-led US Supreme Court and a congress with a small Democratic majority, meaning that legislation to tackle climate change has reached a political impasse.

On July 20th 2022, Joe Biden visited the state of Massachusetts, where a former coal power plant is being converted for the use of manufacturing offshore wind power equipment. The visit was also an opportunity to announce executive actions, which will include offshore wind projects in the Gulf of Mexico and funding for community cooling centres [5]. Despite these announcements, Joe Biden decided, for now, against formally declaring a climate emergency.

Recently, Joe Biden has faced calls from members of the democratic party to declare climate change as a national emergency. A poll carried out by the Yale Program on Climate Change Communication found that 58% of registered voters would support such a declaration if Congress did not act [6]. Such a declaration, under the national emergencies act, would allow for special emergency powers and procedures. This would allow for such measures as a reinstatement of the ban on crude oil exports in the US and stop oil/gas drilling on federal waters. Hesitation from President Biden to declare a national climate emergency may in part be due to the potential for legal challenges from the republican party who would likely see such a move as anti-democratic.

US Forest Fires Lead to One Billion Tree Planting 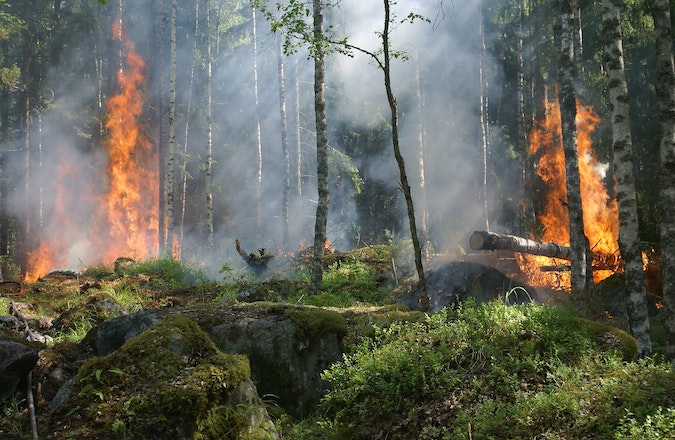 The location of the planting is important, “You’ve got to be smart about where you plant…There are some places that the climate has already changed enough that it makes the probability of successfully re-establishing trees pretty low.” – Joe Fargione, science director for North America at the Nature Conservancy.

To replace the lost tree coverage, the Forest Service plans to increase the rate of acres planted from 60,000 to 400,000 acres per year, and spending is expected to increase from $100m to $260m per year. Insects and the use of timber for commercial purposes also affect the amount of reforesting required. Most of the destruction is, however, due to forest fires which have caused 5 million acres to burn in the last 5 years [7].

The recent announcement to plant one billion trees will be seen as positive; however, many may view the approach as plugging another leaking gap in the climate change problem without tackling the source more directly. The disjointed approach of the Biden Administration is, unfortunately, a reflection of the political environment in the US, not helped by the pressure of the US inflation rate (at 9.1%) drawing attention to the economy. The failure of the US to take drastic action to meet the 1.5C goal of the 2015 Paris Agreement will be seen with ongoing disappointment by many nations across the world who look on the US to take the global lead on climate change.

Pager Power undertakes technical assessments on behalf of developers, which include assessing whether a proposed development infringes instrument flight procedures and would cause a problem for said technology. For more information about what we do, Please get in touch.