Solar parks have not always been seen in a bright light. For example, Greg Barker, one of the greenest Conservative ministers has previously compared large solar farms to ‘monsters’ and described them as gold diggers due to the money that is being injected into this industry. However, recent research by Lancaster University would suggest that Solar parks could have a positive effect on bumblebee numbers. This is potentially great news for bumblebees and for biodiversity in general. This article will explore how exactly bumblebee numbers could be boosted according to this recent study. 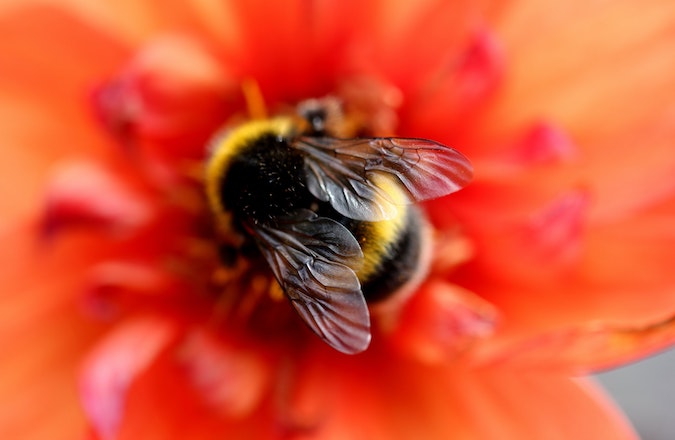 According to the Guardian in February 2020, the likelihood of a bumblebee population surviving in any place has declined by 30% in the course of a single human generation. This kind of rate of decline has been compared to mass extinction levels.

Peter Soroye, a PhD student at the university of Ottawa said ‘“We found that populations were disappearing in areas where the temperatures had gotten hotter. If declines continue at this pace, many of these species could vanish forever within a few decades.” This would imply that climate change could potentially result in a mass extinction of bumblebees.

This would not be good news for the UK and for the world in general, and here is why. Bumblebees are essential. According to friendsoftheearth.uk, bees are important for food supplies to stay stable and healthy, and this is key to the diverse diets we need and have come to expect in the modern age. Without bumblebees doing the hard work and pollinating, plants would not even be able to grow, breed and produce food in the first place. Whether the problem is climate change, exposure to pesticides, or the loss of habitat, something has to be done to save our little friends. Solar parks could be just the thing.

How Solar Parks Can Help

Hollie Blaydes, a PhD researcher at Lancaster University, said ‘Our findings provide the first quantitative evidence that solar parks could be used as a conservation tool to support and boost pollinator populations. If they are managed in a way that provides resources, solar parks could become valuable bumble bee habitat’.

The study also shows that greater bumblebee numbers could have a positive impact on nearby crops, and farmers could decide to utilise a higher number of plant pollinator-dependent crops to enhance this impact, and in turn create a positive domino effect whereby crop numbers and bumblebee numbers drive each other. All of this could come about with simply having more solar parks being built. Furthermore, as the area of land utilised for solar parks is increasing in the UK, so does the potential to turn solar parks into wildflower meadows and thus increase bumblebees. One would imagine that if this is done at a large scale, bumblebees could be saved from mass extinction.

Hollie Blaydes also said that ‘In the UK, pollinator habitat has been established on some solar parks, but there is currently little understanding of the effectiveness of these interventions. Our findings provide solar park owners and managers with evidence to suggest that providing floral and nesting resources for bumble bees could be effective.’ Therefore, a greater understanding of how effective the methods mentioned in this article actually are is required if bumblebee numbers are to be increased on a large scale.

An example of a solar farm that is taking action to save biodiversity is Raspberry Solar Farm, located in Kent. This project is not only saving butterfly and bee habitats with the use of new wildflower meadows, native hedgerows and trees, but it is also achieving this using far less carbon than what a fossil fuel process would use. The example has been set to show that it is possible.

Less climate change and more bumblebee numbers is likely to result in a win-win situation for everyone, including our hard-working bumblebees who are essential for life as it is today. The question is are we willing to build more ‘monster’ solar farms that are managed correctly to save our little friends? Only time will tell.

The benefits of a Pager Power Glint and Glare Site Survey