Why do we need accurate modelling?

Wind turbine applications all over the world are subject to intense scrutiny from planners, local residents and even the media. Of principal concern are adverse impacts that could occur following construction of turbines. There are numerous types of impact, visual, ecological, technical, the list goes on.

How to ensure accurate modelling

The term ‘modelling’ is wide and applicable to a multitude of disciplines. Specific recommendations and best practice vary from topic to topic. However, it is generally important that any modelling is based on:

As an example, consider the potential for impact on terrestrial television signals in the area surrounding a proposed wind development. In order to accurately predict the potential impact, it is important to consider:

The figure below [1] illustrates the relevant considerations required for a comprehensive assessment approach. 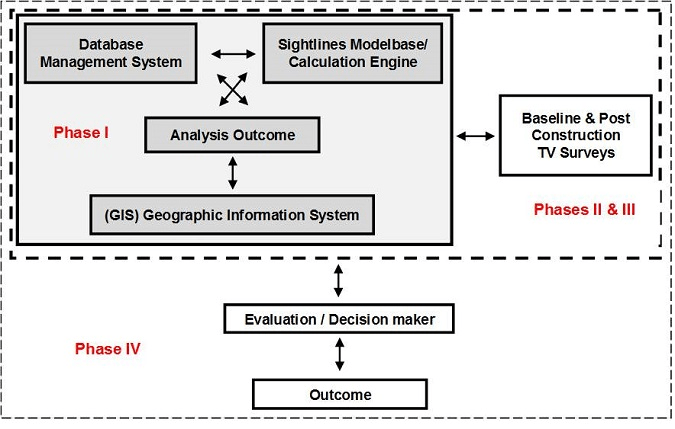 Many kinds of technical modelling require terrain data. This is applicable to visual impact, aviation concerns such as radar, TV signals, shadow flicker etc. Broadly speaking, terrain elevation is taken from a dataset based on values at a defined spacing interval. This can be based on the elevation of the terrain only, excluding obstructions above ground, or it can incorporate the effects of buildings and trees. These two types of dataset are known as ‘Digital Terrain Model’ (DTM) and ‘Digital Surface Model’ (DSM) respectively.

In order to get the best out of a good dataset, it is important to have a sophisticated algorithm that accurately predicts the height of the terrain at any point, not just at the specific points for which the heights are known.

This is a complicated topic, discussed further here, but three potential approaches and the difference in their results are illustrated in the figure [2] below. 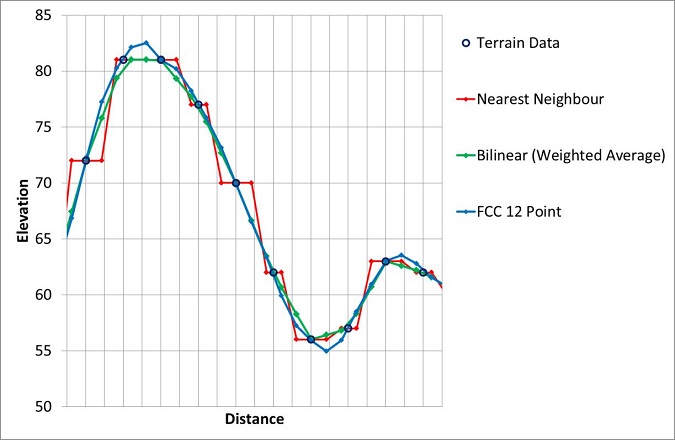 It can be seen that the choice of algorithm will affect the modelled value of the terrain. It is important to ensure that an appropriate choice is made based on which approach is the most accurate and which is the most conservative.

Here at Pager Power, we use the weighted average algorithm in analysis.

Use of inaccurate or over-simplified modelling is a dangerous practice. Significant issues that this can cause include:

The renewable energy industry is dependent on detailed modelling at the planning stage. This is particularly important for wind developments due to their sheer size. In order to maximise the potential for such developments and to avoid unexpected costs it is vital to utilise accurate modelling methodologies.