Plans have been submitted proposing to position a large solar farm of almost 50MW on a former World War 2 military airfield in Northamptonshire.

About the Solar Farm

Plans detailing the project were submitted to Kettering Borough Council by developer NF RAF Desb Ltd. The proposed 49.9MW photovoltaic (PV) park would cover approximately 114 hectares of land across the site of the former Royal Air Force (RAF) Desborough Airfield. Figure 1, shows the indicative solar farm boundary based on information from the site plan layout [1] submitted as part of the full planning application.

The news that the former airfield was allocated for solar development broke back in late 2014, however the specific details were not known then. 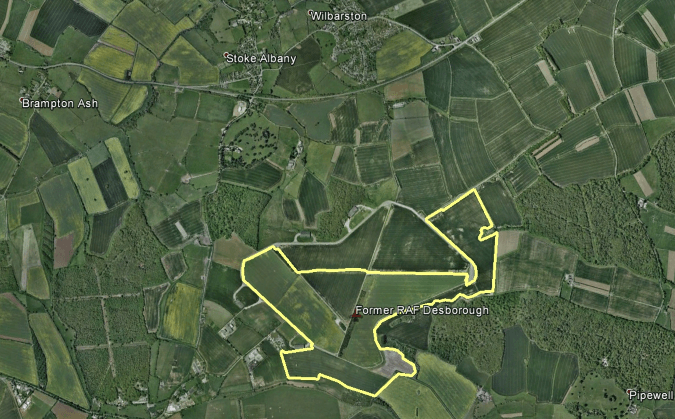 Regarding solar glint and glare consideration, the developer plans to orientate the PV panels southwards, away from properties located in Wilbarston and Stoke Albany [2]. Also, the panels would have an anti-glare finish.

Up to 208,000 solar panels will be used to form the development if planning permission is granted. A decision is expected to be reached 30th July 2015.

Opening in 1943 and closing from military use two years later in 1945, Desborough Airfield served as a RAF Bomber Command base during World War 2. After this time, the site continued operation as a civilian airfield until full closure in the 1960’s [3] [4].