Meteorological agencies around the world use radar to detect weather phenomena. Wind turbines are large structures that due to their size and operation can interfere with the detection capabilities of weather radar (i.e. weather forecasting, precipitation measurements, extreme weather phenomena warnings, etc.).OPERA, an EUMETNET working group has previously investigated the interference mechanisms and produced guidelines for safeguarding weather radar from wind turbines. A quick review of these guidelines is presented in this article.

The purpose of RADAR (Radio Detecting and Ranging) is to detect objects at far distances. This is undertaken by sending frequent radio signals and then ‘listening’ to the responses. Detected targets can include flying objects and weather phenomena such as rain, snow and hail. Radar used specifically for weather phenomena are usually termed weather or meteorological (met) radar.

OPERA is an EUMETNET working group in 31 member states which facilitates the European meteorological radar network. Member states include:

As of September 2013 the OPERA network had 202 operational weather radar among country members. The radar coverage of the European network can be seen in figure 1. 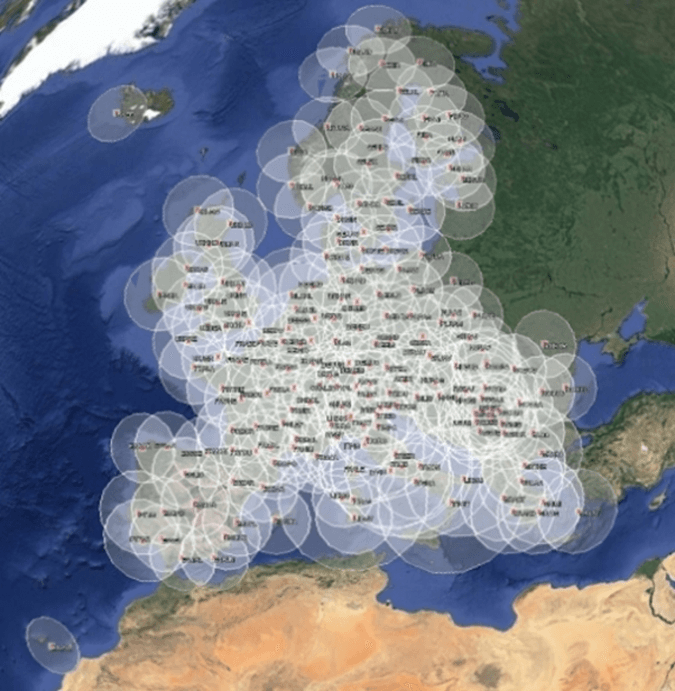 Doppler mode interference was deemed by OPERA to be the most significant.

Based on the produced guidelines [1],[2],[3] and specific collaboration between Denmark (DMI), Germany (DWD), Spain (INM), Netherlands (KNMI), Météo-France and UK Metoffice OPERA recommended that no turbines should be built at distances of:

Furthermore, an impact assessment should be undertaken when the wind turbine(s) are planned within:

OPERA guidelines provide a starting point for screening potential weather radar interference issues and objections from relevant authorities. However, being in the vicinity of a weather radar is not necessarily a showstopper and there are ways that the potential impacts could be examined and mitigated.

[3] Statement of the OPERA group on the cohabitation between radars and wind turbines, OPERA Group, EUMETNET (2010).