Weather radar (also known as meteorological radar) are used around the world to monitor and predict weather. They are invaluable for day-to-day forecasting as well as detecting extreme storms and even monitoring climate change.

Weather radar operate by emitting an electromagnetic pulse that is reflected by precipitation and clouds. This leads to an ‘echo’ that is detected by the radar when the reflected pulse is received. Certain types of weather radar are also able to estimate the wind speed.

Wind turbines can affect weather radar by interacting with the electromagnetic pulse that is intended to detect precipitation. The two main issues [4] are:

As ever more wind farms are built, potential impacts on weather radar become a greater issue. This is in part due to cumulative impacts and the fact that more and more locations are being explored for the siting of wind developments.

It is also a fact that good wind turbine sites also make for good weather radar sites, i.e. elevated terrain, away from densely populated areas and good connectivity to the national grid.

Weather radar are generally sited to form a network that has maximum coverage i.e. it tries to be able to detect as much as possible, increasing the chances that new wind turbines could have an impact.

The figure below shows the weather radar locations [5]  in the United States. 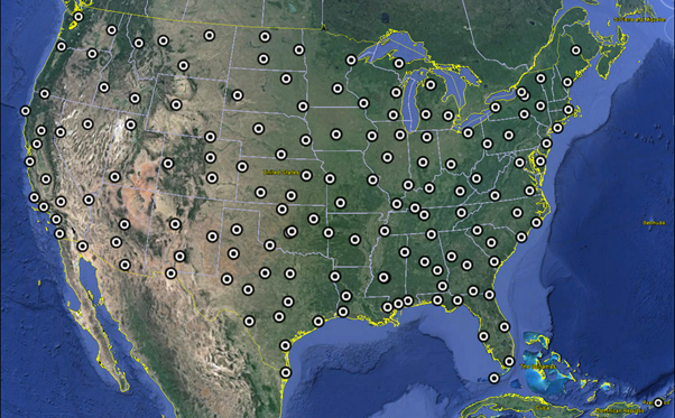 Different countries may employ different safeguarding distances. Furthermore, some countries (including the UK) have adopted the OPERA recommendation but state that within 5km, concerns would be significant and mitigation would be necessary [7]. This is not the same as saying that turbines cannot be built at such ranges.

There are mitigation options for cases where turbines stand to affect weather radar. These include modification of the layout, adjustment of the turbine dimensions or changes to the radar itself.

It has been reported [8] that Environment Canada is preparing to implement new radar technology to address the wind farm clutter issue.

There are measures that can be taken to prevent issues, including siting turbines at an appropriate distance or ensuring the elevation of the blades is below the radar main beam. It is important to be aware of the location of your wind turbines relative to any weather radar and how this fits in with a particular country’s safeguarding stance.