Is the future of Solar PV clear?

Is the future of Solar PV clear?

Solar photovoltaics (PV) are currently the main source of renewable energy generation from the sun worldwide[1,2]. Main reasons include its versatility, good economics and its potential for scalable deployment from domestic rooftops to hundred megawatt plus ground mount schemes. Other less common solar technologies include solar thermal and concentrated solar, with the former typically being used for the heating of water rather than the generation of electricity. Technological leaps in  PV technology are making the typical solar panel cheaper and more efficient, but are there alternative PV technologies which will some day replace the traditional panel?

The technical challenges of the traditional panel

Considering the above, are there alternative technologies which could replace the need or reduce the burden on the traditional PV panel?

Light may be at the end of the tunnel for those not wanting or being able to implement traditional opaque PV panels. A South Korean university has developed a transparent solar PV cell[3] which has many potential applications which would avoid the common technical issues encountered with the traditional panel. The most likely application is to be the replacement of standard glass with PV glass. Its transparency also means it could be incorporated into many other everyday objects. 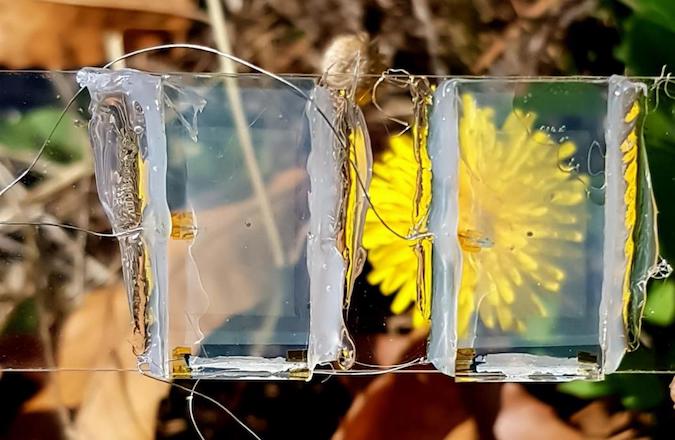 It is the layers of semiconductors within traditional panels which make them opaque. This new technology, developed from the Department of Electrical Engineering at Incheon National University in South Korea, utilises titanium dioxide and nickel oxide to produce a transparent solar cell. Titanium dioxide and Nickel oxide absorbs UV light while allowing most of the light in the visible range to pass through, and both are environmentally friendly.

In their initial studies, the researchers ‘devised a cell composed of a glass substrate and a metal oxide electrode, on top of which they deposited thin layers of the two semiconductors one after the other and added a final coating of silver nanowires to act as the other electrode’[4].

The initial studies suggest that it has a power conversion efficiency of 2.1%. The scientists state that this may seem small but its current design only targets a small part of the light spectrum – therefore there is a potential for greater efficiency with more research. The scientists also state that the cells are highly responsive and work in low-light conditions.

In terms of transparency, the current designs let as much as 57% of the visible light passed through, making it fairly transparent, and that further research could produce panels which are almost entirely transparent.

What could be its future potential?

Whilst this is by no means a technically viable option that could be implemented today or even in the next few years, it is possible that it could be a useful contributor to the renewable energy mix. Potential applications include assisting with making new building developments carbon neutral or with making vehicles more efficient. Retrofitting to older buildings may however be a more difficult proposition. In any case, there is a long way to go before transparent PV glass becomes a viable alternative to using the traditional solar PV panel.

Lastly, there are other technologies within this area which may mean this becomes a competitive market. The alternative technologies identified involve the application of PV coatings onto a glass surface, rather than application within glass structure itself[5,6]. There is also Tesla’s Tile[7] which is a solar PV roof tile which replaces your existing roof. This however will not be technically possible on developments that don’t have tile roofs, for example high rise and many commercial properties.

Traditional solar PV panels are undeniably the short to medium term technology and transparent solar PV is not going to replace large-scale commercial PV developments simply due to scale and efficiency.  What PV glass could do however, is change domestic and small-scale deployment of PV from panel to transparent glass on new developments. It is therefore likely to be a supplementary technology used to complement other renewable technologies rather than a replacement for the traditional PV panel.