Pager Power has over a decade of experience dealing with and overcoming wind farm radar objections. Many potential mitigation techniques are available to overcome said objections however some solutions are more likely to be implemented than others. It is possible that the most common source of technical mitigation for wind farm clutter is ‘in-fill’ radar coverage. This article presents an overview of the mitigation technique for Primary Surveillance Radar (PSR) along with examples where it has been implemented.

The affected area of the radar screen is ‘blanked’, meaning that no clutter is displayed to an air traffic controller (whether the source of the return is from wind turbines or indeed aircraft). This subsequently leaves a zone where there is no coverage. This is resolved by incorporating a feed from an existing or newly sited PSR. This radar would need to provide coverage in the airspace above the wind farm whilst also not being affected by the wind farm. This is typically achieved by existing screening i.e. terrain, preventing the radar from being able to detect the wind farm. This radar feed is then ‘patched in’ over the blanked zone such that radar coverage on the radar screen is restored. 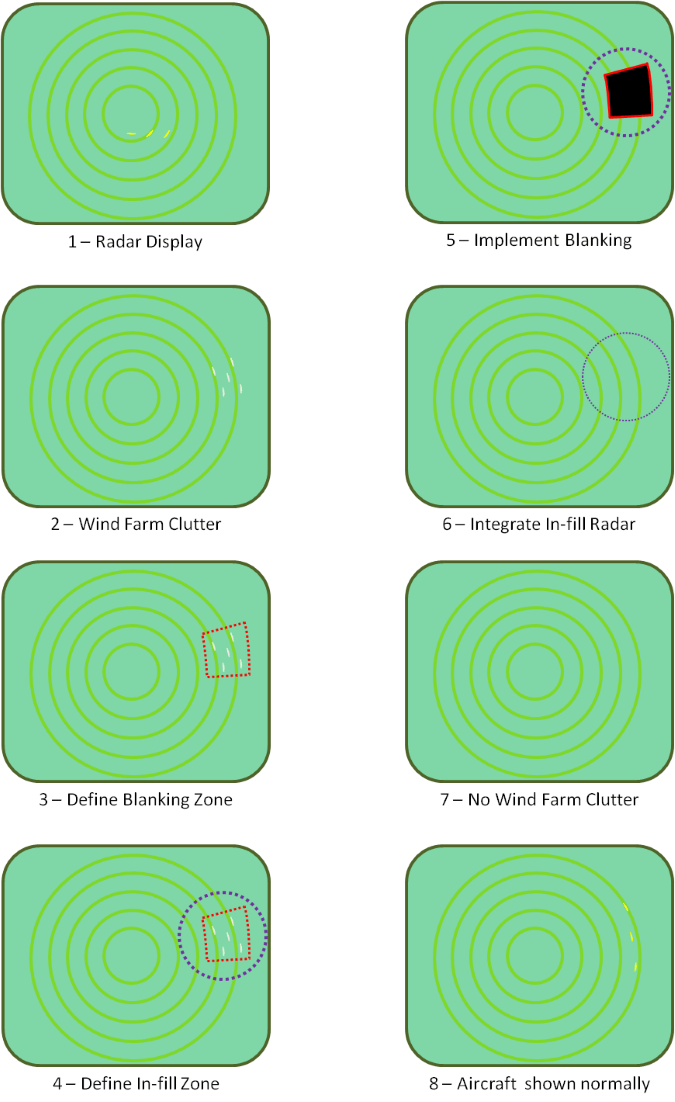 There are a number of points that must be considered when determining the suitability of in-fill as an appropriate mitigation technique, these are presented below:

Examples where in-fill radar mitigation has been successful

The Whitelee Wind Farm is a classic example of successful implementation of in-fill radar as a mitigation solution. In brief, this wind farm’s impact upon Glasgow Airport’s PSR was mitigated via the Kincardine radar, which was specifically sited to mitigate the wind farm’s impact. More information can be found within the case study. A more recent example is presented here. The article describes the intended in-fill mitigation solution for the proposed Goole Fields Wind Farm. Specifically, the Little John radar at Hibaldstow is expected to mitigate the technical impact of the wind farm on the PSR at Robin Hood Airport Doncaster Sheffield (RHADS). It is believed that the Little John radar was initially installed as a mitigation measure for the effects of the Keadby and Tween Bridge wind farms by providing in-fill coverage at RHADS.

Editors Note: This post was first published on 3rd May 2011, but has been updated for accuracy and comprehensiveness.