Fuel cell electric vehicles are an interesting proposition for those who want to go green, but they’re not as widely available as full EVs. Because they reduce the amount of carbon emissions emitted into the atmosphere, electric and hybrid cars are becoming more and more popular. There are other ways to drive more environmentally friendly though [1]. Hydrogen fuel cell electric cars sound like something out of science fiction, but they might just be the gateway to green fuel. 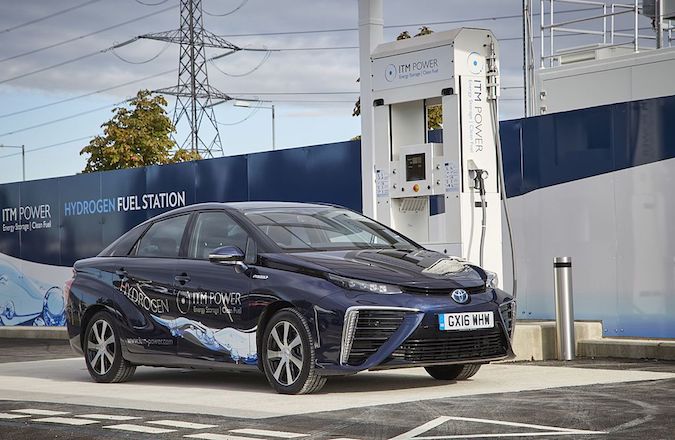 How do They Work?

In contrast to electric automobiles that predominantly rely on lithium-ion battery packs and consume fuel, hydrogen vehicles use fuel cells to power their motors. Like electric vehicles, hydrogen cars don’t generate harmful emissions, only water vapour is produced as a by-product. You may also hear people refer to them as fuel cell electric vehicles (FCEVs).

The fuel cells are similar in design to a lithium-ion battery: they have an anode, a cathode, and a catalyst that triggers the separation of electrons and protons from hydrogen gas pumped inside. To produce energy, hydrogen automobiles feature numerous fuel cells operating concurrently, similar to the lithium-ion cells in an EV battery. That collection of cells is called the hydrogen fuel cell stack. [3]

Through a process known as reverse electrolysis, hydrogen from the car’s onboard fuel tanks combines with oxygen inside the fuel cell stack to produce power. The engine is powered by removing the electrons from the hydrogen gas, which are then transmitted through the circuit to do so. On the other side of the circuit, the electrons and oxygen combine to generate water vapour, which is then released through the car’s exhaust. [4]

Despite its drawbacks, hydrogen is increasingly being considered as a practical alternative energy source for everything from vehicles and buses to aeroplanes. FCEVs could be a game-changer for environmentally friendly transportation if we can figure out a practical way to make hydrogen production more environmentally friendly while also constructing the required refuelling infrastructure.

[5]  Energy.gov. 2022. Safe Use of Hydrogen. [online] Available at: <https://www.energy.gov/eere/fuelcells/safe-use-hydrogen>