Floating wind turbines appear to be a technology capable of further developing offshore wind by unlocking deep water areas that are currently not viable.

During All Energy 2015 conference last May in Glasgow a session titled ‘Floating Turbines’ was held where various floating turbine technologies and their potential for the growth of offshore wind were discussed.

In this article we summarise:

Various concepts have been presented and are currently under development. These include Hywind, WindFloat, Damping Pool and Pelestar TLP. Two that were presented and discussed at All Energy are Hywind and WindFloat.

Over the last few years Norwegian Statoil has been developing an innovative floating turbine technology called Hywind. Briefly, this is comprised of a simple substructure construction having a conventional 3-line mooring system. There are three stages in Statoil’s vision regarding Hywind technology; these are [1]:

Stage 1 – Hywind Demo: A 2.3 Megawatt (MW) floating wind turbine was installed in 2009, 10 kilometres off the south-west coast of Norway and is currently operational. The turbine has a hub height of 65 metres, a rotor diameter of 83 metres and an overall tip height of 106.5 metres above mean sea level.

Stage 2 – Hywind Scotland Park: Following the evaluation of Stage 1 Statoil is currently planning five 6 MW floating turbines off the Aberdeen coast. The turbines are planned to have a hub height of 78 metres, a rotor diameter of 154 metres and an overall tip height of 175 metres above mean sea level. The project is planned to be constructed in 2016/2017 and be operational in 2017.

Stage 3 – Large Scale Commercial Parks: Following Stage 2, the vision is to create large scale floating wind parks by expanding into deeper waters in Northern Europe, Japan and the USA. The first large scale project is to happen in 2020 whilst increasing the volume towards 2030. 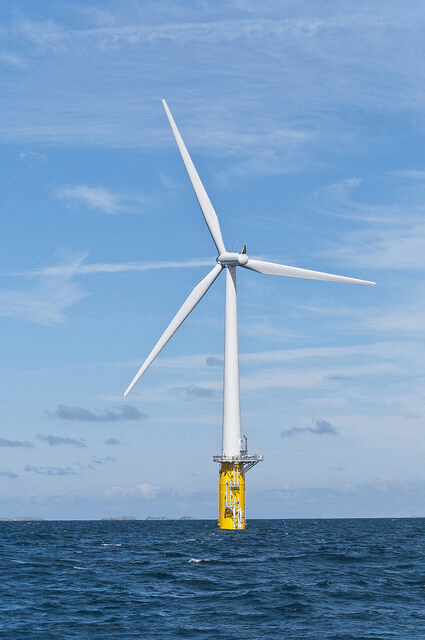 Over the last few years United States based company, Principle Power, has been developing an innovative floating turbine technology called WindFloat. In brief, this is comprised of a 3-column structure fitted with water entrapment plates at the base of each column. There are three phases in Principle Power’s vision regarding WindFloat technology; these are [2]:

Phase 1 – WindFloat Technology Demonstration: A 2.0 MW floating wind turbine was installed in October 2011, 5 kilometres off the coast of Aguçadoura in Portugal and is currently operational. The turbine is believed to have an overall tip height of 120.0 metres above mean sea level.

Phase 2 – WindFloat Pre-Commercial: Following the evaluation of Phase 1, Principle Power is looking into building demonstration scale wind parks up to 2018.

Phase 3 – WindFloat Commercial: Beyond 2018, the vision is to deploy the technology commercially on a global scale. 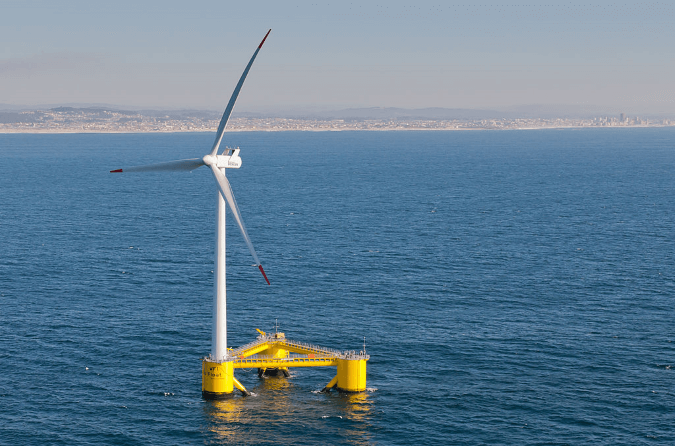 The Opportunity for Floating Offshore Wind in the UK

Floating turbines appear to be important for the growth of offshore wind in the UK and especially Scotland because of [4], [5]:

Outside the UK and especially Scotland, areas that could benefit from floating turbines include Northern Europe, Japan, and the USA among others.

The Benefits of Floating Turbines

There are many reasons why floating turbines make sense when particular conditions apply. Key reasons include:

Floating wind turbines appear likely to grow in the future and in the next few years a number of currently developed technologies aspire to be used in large scale commercial offshore wind parks around 2020. There appears to be a lot of potential for growth in the UK (especially Scotland), Northern Europe, Japan and the USA.

[2] Enabling a Paradigm Shift for the Offshore Wind Industry by João Metelo. Presentation at All Energy 2015 Conference, Glasgow (07/05/2015).

WindFloat by Untrakdrover (Own work) via WikiMedia/ CC BY-SA 3.0 / image cropped and resized from original.