You probably know that interference to communications, navigation and surveillance (CNS) infrastructure can cause delays to UK onshore wind developments, especially if it is related to aviation and radar. So it might come as no surprise to be told that the same can apply to offshore wind projects.

Knowing the issue exists is one thing. but knowing how to deal the issue is another. So in this post we aim to provide some brief background information on this issue, and recommendations based on our experience. 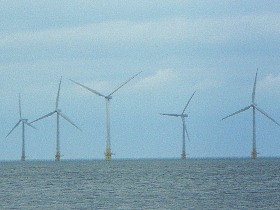 The UK news seems to be buzzing about offshore wind farm development recently. And why wouldn’t it? The UK is currently the global leader. It has over 1000 wind turbines deployed offshore already, and as of January 2014, an installed generating capacity of 3.6GW.

To cap it off, the UK is the most attractive destination for investment in the world, according to the Ernest & Young Renewable Energy Country Attractiveness Index published in November 2013. In March this year it was announced that the UK offshore wind sector had an investment worth £310 million. So with such a large investment we are expecting to see more wind plants get erected off the UK coastline.

The UK is currently (April 2014) home to 22 operational offshore wind farm projects, and some of those are known to have had aviation planning issues.

Take for instance the 88 turbine Sheringham Shoal project, off the coast of North Norfolk. The developers received an objection due to interference with an airport Secondary Surveillance Radar (SSR) and impacts on low flying aircraft. We actually worked on resolving these issues. (You can learn more about our involvement in Case Study 02).

Another recent example of an aviation issue experienced by a UK offshore wind farm concerned Manston Airport’s radar and the Kentish Flats Extension. Where Swedish developers Vattenfall had to invest money with US company C Speed to install their LightWave radar, in order to mitigate the potential turbine impacts on the airport.

How Can Potential Aviation and Radar Issues be Assessed?

Assessing the potential impacts of offshore – or in fact any – wind turbines on aviation and radar issues can be difficult. This is, in part, because there is no single source of guidance and there are many different factors to consider.

Consultation with affected stakeholders – for example the Ministry of Defence (MOD), NATS and aerodrome (including offshore heliport) operators  – is something that is best practice. But this requires you to know which ones your project is likely to affect. Finding this information can be particularly tedious, confusing and can require interpretation of many different specialised maps. *If you want a quicker way to evaluate your wind site against over 1600 UK Aviation Risks,  consider the Aviation Risk Assessment.*

Once you have an idea of the aviation sources that pose the highest risks to your project, more in-depth analysis can be undertaken if required. So for instance, if you have identified your project to impact a specific radar, then you might care to run a Radar Line of Sight Assessment.

Can we help you?

Pager Power is proud to have worked on 24% of operational UK wind farms, assisting in matters relating to radar, aviation and communications interference. If you are facing a similar issue, why not let us help you? Just get in touch with us to discuss. Call +44 (0) 1787 319001 or email info@pagerpower.com.