We review party manifestos to find the strongest renewable energy supporters. We looked at how much each party had to say on renewable energy; when they plan for zero net carbon emissions and specific policies for renewables, wind and solar. We then ranked them accordingly. 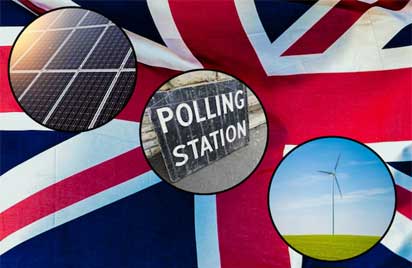 The Brexit Party contract does not mention renewable energy and makes a commitment to reduce taxes on energy which would result in an increase in carbon dioxide emissions from energy. Climate change is very very low on its agenda and there is no commitment to increase renewable electricity generation.

At the time of writing the Conservative Party has not published its manifesto. Nevertheless its website contains a lot of information for would-be voters. There is a commitment to net zero emissions by 2050 as well as a specific commitment to increase offshore wind from 30 Gigawatts to 40 Gigawatts. Climate change and renewable energy is not prominent on the Conservative website.

The SNP has not published a manifesto for the 2019 election. Historically it has been very supportive of onshore and offshore wind energy in Scotland with substantial generation established. Currently, however, its website has very little focus on renewable energy and much more on protecting and developing North Sea oil and gas.

The Labour 2019 manifesto is radical and detailed. A significant part of it is focussed on addressing climate change with a specific objective of net zero emissions achieved during the 2030s. Specifically they state they will build 7,000 new offshore wind turbines; 2,000 new onshore wind turbines and enough solar panels to cover 22,000 football pitches.

The Liberal Democrat party has published its comprehensive manifesto for the 2019 election. There is a strong commitment to addressing climate change and develop renewable energy. Specifically they state that 80% of electricity generation will be from renewable sources by 2030.

The Green Party has published its detailed 2019 manifesto too. It has a commitment to Net Zero emissions by 2030 as well as a carbon tax. Climate change and the environment are central to all its policies.

Find out more about what Pager Power does to support planning in the Renewables sector.