In recent years, documentaries that touch upon the damaging effects that animal agriculture is having on climate change and ecological degradation are becoming ever the more prominent. The most well know of these being Cowspiracy: The Sustainability Secret [1], which focused on the large scale inefficiencies of animal agriculture, in particular the production of beef and the enormous amount of greenhouse gas emissions, water usage, water pollution (including ocean dead zones), and habitat destruction that results. Last year, David Attenborough’s swansong to the environment (David Attenborough: A Life On Our Planet [2]) described that a shift towards sustainable food sources (i.e. the reduction in meat and dairy consumption) would be required as part of many solutions to tackling climate change. Finally, Seaspiracy [3] (released in March of this year) focused on the effect that fishing is having on our oceans, including the amount of plastic contained in the sea. The documentary explained that the plastic waste contained in oceans is primarily caused by wasted fishing gear rather than the perceived perception that this is due to common household plastic waste such as plastic straws.

Politicians worldwide have made broad and bold statements at climate conferences highlighting the need to quickly change our collective modus operandi with a focus on shifting towards renewable energy sources and a phasing out of fossil fuels. Unfortunately, despite prominent documentaries and research that has been undertaken, there is a distinct lack of discussion at environmental conferences (the most noteworthy being the Paris Climate Agreement 2015) surrounding changes to sustainable food sources as a solution to avoiding climate catastrophe.

Eating Our Way to Extinction – Review

A new documentary Eating Our Way to Extinction has recently been released and explains in detail the destructive effects and unsustainable practices of animal agriculture. The film, narrated by Kate Winslet and directed by Otto Brockway, begins with tree felling and the destruction of forests. Forests absorb vast amounts of carbon dioxide and can sustain great biological diversity. The answer to that previously posed, why the production of sustainable food sources is not being discussed prominently on the world stage, is perhaps best summarised in the opening scene. 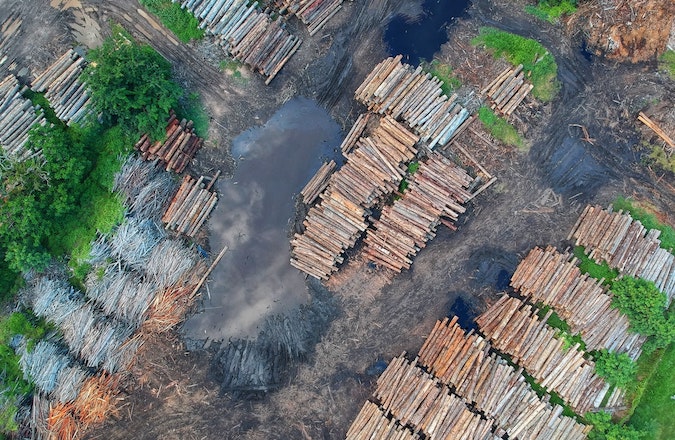 We hear from an unknown masked character holding an assault rifle, presumed to be a gun for hire for those backing the commercial practices that fuel the destruction of the Amazon rainforest “Why should we give land to the Indians (Brazilian tribes)…the whole world thinks they can tell Brazil what to do with her land…no, we do what we please”. Livestock production is responsible for 80% of Amazon deforestation (either in the form of cattle ranching or in the production of feed) [4]. As the documentary describes, “it is often believed that much of the soy being produced (as a result of this deforestation) is for human consumption”. In fact, this only accounts for 6%, with 75% of soy production being for animal feed for livestock” [5]. As the film seeks to highlight through various examples, it is the economic influences that are restricting this topic from being highlighted more prominently by politicians. The director interviews agriculture lobbyists, who focus on winning the favour of politicians and restriction of legislation that could negatively affect commercial interests related to the production of meat and dairy. As the documentary explains, the worlds top 5 livestock corporations release more greenhouse gas emissions than Exxon, Shell, and BP [6].

If having watched Seapiracy earlier this year didn’t put you off eating fish for life, then some of the information contained within this documentary may do so. Some of the facts described include: We have lost 90% or large fish since the 1950s and the worlds fish stocks are predicted to collapse by 2030 [7]; 1/3 of all edible fish caught in the ocean are now fed to livestock and farmed fish [8]; and 70% of fish eaten today are farmed fish. Farmed fish are kept close together in small cages leading to the spread of disease such that the fish are often full of lice.

The documentary explores farmed fishing in Bergen, Norway, one of the largest exporters of farmed fish in the world and the largest exporter of farmed salmon and cod. The film interviews Liv Holmefjord, the Director of Norwegian Fisheries (in charge of regulating the farmed fish industry), and she defends her ownership of shares in one of the largest fish farm companies in Norway. In gruesome details, we see a clear description of the lengths that the industry has to go to in order to keep the farmed fish alive despite the disease-ridden environment in which they live.

Pesticides, disinfectants, and antibiotics are sprayed into the cages in order to rid the fish of lice and keep them alive. The fish are bathed in toxic chemicals such as hydrogen peroxide and azamethiphos to kill the parasites and given feed with toxic chemicals such a teflubenzuron, emamectin, and diflubenzuron. It is also shown that this is not isolated to Norway; toxic chemicals are often used in Scottish fish farms. We see a worker in Scotland wearing significant protective gear and spraying the vast amounts of chemicals required. Furthermore, the film details that 80% of plastic in the oceans is made up of discarded fishing gear and that this plastic is bioaccumulated. The University of Plymouth have found that 1/3 of all the fish that they tested contained microplastics which is then consumed by humans.

Furthermore, the documentary touches upon the recent covid pandemic and how the Swine Flu, Ebola, Bird Flu, and SARS, among other viral diseases, were transmitted from animals to humans. Virologist Dr. Jane Greatorex describes how live animal wet markets are a breeding ground for the spread of past and future pandemics.

It is apparent that policymakers are slow to move when addressing the aspect of sustainable food sources in keeping with the crisis that is facing the planet, and this is potentially due to economic influences. In the USA, each year $38 billion is given in subsidies to the meat and dairy industry, whereas $20 million is given to the production of fruits and vegetables. Likewise, in the EU each year, £24 billion of taxpayers money is spent on livestock farming.

There is a possible way forward in the form of individuals making sustainable food choices rather than waiting for politicians to take the lead. Recently McDonald’s has released a ‘McPlant’ burger in the UK; this may be in part due to the rise and popularity of those adopting a plant-based diet or seeking to reduce their consumption of meat. Whilst an increase in plant-based diets or individuals reducing their consumption of meat can be seen in wealthier nations (in the UK, meat consumption has fallen by 17% in the last decade [9]), global consumption of meat is on the rise and is expected to rise at a rate of 1.4% each year. The most significant increase in meat consumption is expected in Africa and the Middle East [10].

COP26, the most important climate conference since the Paris Climate Agreement (due to be hosted in Glasgow, Scotland, on the 12th of November 2021), has detailed four main items that need to be achieved at the conference. The goals focus on electric vehicles, deforestation, investment in renewables, restoring ecosystems, working together, and there is a focus on ‘mobilising finance’.

It has been shown that a football pitch size of the Amazon rainforest is being cleared every minute [11], and under the current direction taken by Jair Bolsonaro (President of Brazil), there is no significant opposition to the current progression of deforestation [12]. This may be due to the potential economic benefits. Brazil is now the world’s largest beef exporter; in 2018 alone, this contributed $6.7billion to their economy [13]. The ‘Mobilise finance’ COP26 goal details a commitment to at least $100billion in climate finance “developed countries must make good on their promise to mobilise at least $100bn in climate finance per year by 2020.” At this stage, it is unknown whether mobilising finance will support or incentivise countries such as Brazil to retain forests (2.6 billion tonnes of carbon dioxide are absorbed by forests each year [14]), thus replacing the economic potential of deforestation.

Unfortunately, the COP26 conference does not appear to highlight the need to switch to sustainable food sources. Furthermore, it is unknown whether Scottish Farmed Salmon will be on the menu for politicians arriving at COP26 from all over the world.

Eating Our Way to Extinction is available on streaming platforms and was released on the 1st of October 2021.

The Importance of Water