The DeTect Harrier Aircraft Detection Lighting System (ADLS) enables lights to be illuminated as aircraft approach a wind farm. Lights are extinguished once the aircraft leaves the area. The DeTect system typically uses two radar and is operational at three North American sites with more in the pipeline. DeTect’s first European system is set to go live in Germany this summer with further systems on the horizon in Germany and elsewhere in Europe. 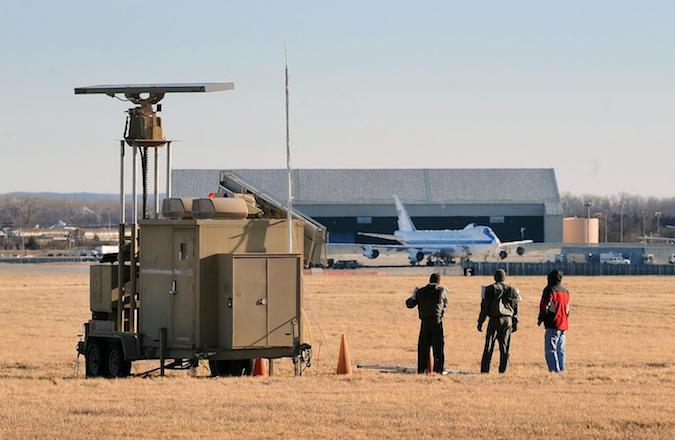 DeTect is a US company based in Panama City, Florida.  It supplies local radar systems for detecting birds, aircraft and drones. It has a European sales office in West Sussex, England.

How does the system work?

Wind Turbine Lights can have a significant visual impact at night – particularly in a dark environment. Turbines taller than 150 metres need to be lit at night due to national and international rules and legislation. National legislation is sometimes amended to allow lights to be switched on only when aircraft are detected in the vicinity of the wind farm.

The DeTect system has local primary surveillance radar, similar to the one pictured above, that detect approaching aircraft – sending a switching signal to illuminate lights fitted to wind turbine nacelles.

The radar itself has a range of up to 24 miles which satisfies the typical requirement to illuminate turbines when aircraft are detected within 3-4 nautical miles.

What other mitigation techniques are there?

Other techniques for mitigating the impact of lights at night include:

We can help with: