Renewable energy plants have historically been a divisive topic – expensive to build, rely on sunlight or wind, and an eyesore to those who live in their vicinity. Changes in perception have been afoot however. At one time the notion of a country being fully powered by renewables was a pipe dream, held by the educated few, as research into both climate change and the design of renewable power sources was in its infancy. In 1975, the world had just fallen victim to an energy crisis of epic proportion and solar photovoltaic cells and wind turbines were on the rise. Bent Sørensen published a research paper to determine whether Denmark, his home country, might be able to be 100% renewable [1]. At the time however, climate change was not apparent to most people. Furthermore, solar panels were 100 times as expensive as they were today with less than a third of the efficiency. The result was that the report received a lukewarm reception and little was done about it. 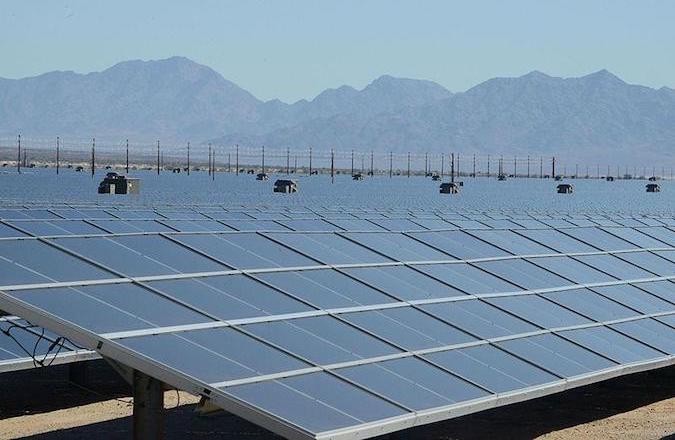 Fast forward almost half a century and the implementation of 100% renewable energy is far more practical. The cost of photovoltaic arrays has plummeted, with costs now around the 8 cents per kilowatt hour mark [2]. Wind energy can cost as little as 3 cents per kilowatt hour having declined 60% in the past 10 years [3,7]. This compares with ~20 cents per kilowatt hour for other electricity sources. From an economic standpoint, generating power from these sources is clearly a viable option. This is especially true when one considers that the United States benefits from its vast land mass, giving the country the space to build extensive solar and wind farms. Parts of Arizona, New Mexico and Nevada enjoy over 2500 kilowatt hours per square metre of direct normal irradiation per year [4], some of the highest in the world, making these locations excellent for the construction of solar panels. Midwestern states including Kansas, Nebraska, Wyoming and South Dakota benefit from some of the highest average wind speeds in the world, with averages of 7 miles per hour [5].

An Impetus for Change

Over the past ten years in particular, the effects of climate change have become increasingly apparent. Weather extremes have become more common and have manifested themselves quite clearly in disasters such as the California wildfires of 2020, and average temperatures continue to rise at a rate of 0.3 degrees per decade. This may sound small but Earth’s temperature is a delicate balance with an abundance of tipping points which must not be toppled. The 2015 Paris Climate Agreement and UN climate change conferences such as COP26 show an appetite by governments to reduce climate change, and in the USA the expansion of clean energy loans as part of the Inflation Reduction Act show that the US government has an interest in curbing carbon emissions and that a move to renewables, given the financial implications discussed above, is a very desirable way of working toward this.

The main problem with expansion of renewables is clearly not an economic one. The rapid reduction in the cost of renewables has the drawback that they are still perceived as being expensive, and the amount of land they take up means that energy is generated in more sites. This means that they can be perceived as an eyesore by those who do not want solar panels and wind turbines in their local neighbourhoods. Objections may also arise from those who work in industries related to fossil fuels. This encompasses a diverse range of occupations, from those operating the plants, to those who mine the materials including coal miners and workers on oil rigs [6], to those who own the coal, oil and gas companies. The new solar plants and wind farms will of course create jobs, however, as the new systems will need to be constructed and maintained. This manifests itself in Biden’s clean energy bill, which plans to create over 10 million of them. [8]

The solar panels and wind turbines may also cause other unintended effects not caused by fossil fuel plants, despite the reduction in hazardous greenhouse gas emissions. Solar PV arrays reflect some of the light which comes from the sun, and this may, if the panels are not carefully placed, cause glare towards roads, flight paths or dwellings. Wind turbines may disrupt radio signal or radar technology and could also obstruct flight paths if constructed too close to an airport.

These problems can be overcome easily. Pager Power specialises in ensuring that these problems do not arise or can be mitigated if they do. Pager Power handles stakeholder consultations including the handling of objections to wind and solar projects, allowing a plan for 100% renewables in the USA or elsewhere to become a reality.

[1] Gearino, D., 2022. Inside clean energy: The idea of 100 percent renewable energy is once again having a moment. Inside Climate News. Available at: https://insideclimatenews.org/news/25082022/inside-clean-energy-renewables/ [Accessed September 13, 2022].