Wind Farm developers in South Africa are receiving objections because of concerns that vibrations from their wind turbines will interfere with shale gas exploration. Additionally wind farm developers have been concerned about the effects the fracking process could have on their operational wind turbines. 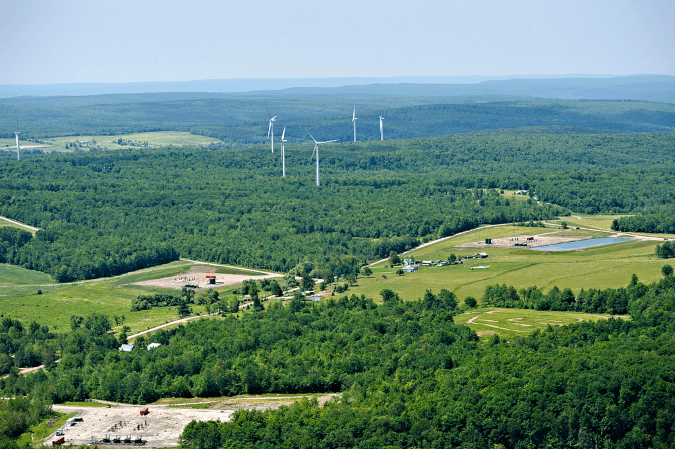 Wind turbines in the United States surrounded by fracking sites.

In the United Kingdom (UK) wind turbine concerns have been raised by the Ministry of Defence (MOD) due to the potential impact of seismic vibrations on the Eskdalemuir facility used for detecting the testing of nuclear weapons. Pager Power has helped a number of English and Scottish wind farm developers resolve these issues.

Typical onshore wind turbines range in height between 100 and 150 metres (328 and 492 feet). The towers have deep concrete foundations which mean that vibrations caused by turbine operation propagate into the Earth’s surface.

Hydraulic fracturing (fracking) is a process for extracting gas and oil from shale rock. Firstly a hole is drilled into the earth after which a high pressure mixture of water, sand and chemicals is used to drive the gas out.

Before fracking can take place exploration is necessary to find suitable oil and gas reserves. The exploration process can involve seismic monitoring and test drilling. Area based fracking licences are granted to exploration companies. Test drilling has caused minor earthquakes with one having a magnitude of 2.2 in 2011 near Blackpool UK:

In western and northern Texas there are areas where wind farms and fracking coexist with no apparent interference between the two industries.

It is important to recognize that the Earth is subject to continuous seismic activity and that there are also many man made causes of ground vibrations including road vehicles and trains. The size of induced vibrations from man-made sources diminishes with distance from the source.

Seismic surveys will always have to deal with background seismic noise and seismic noise generated by wind turbines is unlikely to be significant in the vast majority of cases.

Fracking and fracking exploration has been shown to trigger seismic events. The evidence appears to be that the triggered seismic events do not appear to be any larger than events that would happen anyway.

Wind turbines are designed to withstand seismic events with various international standards defined to achieve this. The IEC standard for wind turbines specifies a design level earthquake as a 475 year event.

It is unlikely that Fracking activities would have any significant impact on wind turbine operations where the turbines are designed to withstand major local seismic events.

Image accreditation: “windmills-05” by dfbphotos via Flickr / CC BY 2.0