Key information for wind developers from the Eskdalemuir Interim Guidelines

Key information for wind developers from the Eskdalemuir Interim Guidelines

We have known it was coming since the end of April, and now they have been published. The much anticipated interim guidance document for Eskdalemuir Seismic Array (EKA) and wind developments. And findings from a RenewableUK study say that up to 1GW of wind potential could be unlocked.

The interim guidance came about because new research created a model that indicated there was room – in terms of seismic vibration – for additional wind turbines to be built within the 50km Eskdalemuir Consultation Zone. This area has a seismic ground vibration – or noise budget – threshold of 0.336nm, which can’t be exceeded.

Nestled away within one and a half pages of guidance are the following key bits of information you should know:

This is the news that caught the industry’s attention, when it first came to light in the Eskdalemuir Working Group Progress Update Note, but is re-iterated in the guidance for good measure.

For applications submitted into the planning system after December 2013, the MOD will use its best efforts to withdraw objections. 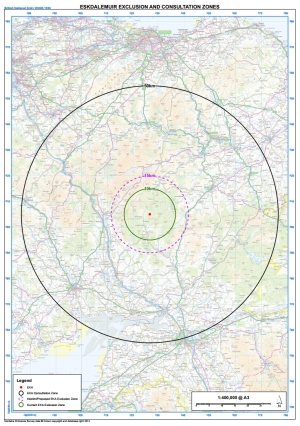 For the applicants of wind developments that fall within a 15km circular area centred on the array, you may have to wait for planning decisions. Until the outcome of the consultation is known, planning authorities have been advised to “delay determining any applications”.

Helpfully, the “Eskdalemuir Exclusion and Consultation Zones” map has been updated to include the proposed new exclusion zone. You can see the map here.

The new model, used to calculate the seismic ground vibrations from wind turbines, uses these parameters. So planning authorities will be ensuring that developers provide this information to the MOD promptly.

The new model, used to calculate the seismic ground vibrations from wind turbines, “was developed using data from large triple-bladed, upwind technologies”. So until the model has extended scope for these technologies, all will be represented as stated above.

The overall take away message from these interim guidelines is that there is movement on this issue where there hasn’t been for years. It reminds us that through accurate modelling, and hard work there can be an acceptable way forward.