Wind farm operators may be asked to pay licence fees for using data from one radar for mitigating the effects of their turbines on another radar. We discuss the radar data costs associated with the development of wind farms in the vicinity of radar facilities.

Wind farms can interfere with radar which means they can adversely affect ATC displays and air traffic control operations. There are technical methods for stopping wind farms affect radar which are known as Radar Mitigation Solutions (RMSs).

Some ATC systems use more than one radar thus increasing the area over which air traffic can be controlled. This arrangement leads to areas with overlapping radar coverage and ATC displays that show a combined picture from multiple radar. This automated data combining process is known as Multi Radar Tracking (MRT).

Radar Mitigation Solutions can make use of MRT to remove wind farm interference effects with this form of mitigation sometimes being known as “blanking and in-fill”. This mitigation can work when the wind farm is in an area of overlapping radar coverage and affects one, but not all, radar.

In the United Kingdom it is usual for mitigation to be paid for by the wind farm developer with mitigation costs consisting of Implementation Costs and Radar Data Costs. Implementation costs can include design costs, testing costs, technical costs, maintenance charges, cost of updates to the safety management system, operational costs and decommissioning charges.

Radar Data Costs are payments made to the owner of a radar for a licence to use the data it collects on an ongoing basis.

Radar Data Costs are payments made to a radar owner for use of radar data as part of a wind farm radar mitigation solution. These costs can be substantial and there is no standard for determining the amount payable.

An example scenario, shown in the figure on the following page, has been established to help explain when Radar Data Costs are normally paid. There are two radar and a wind farm that lies in the area of overlapping coverage. There is a single MRT air traffic control system which combines and displays data from both radar. Each radar serves a Designated Area. 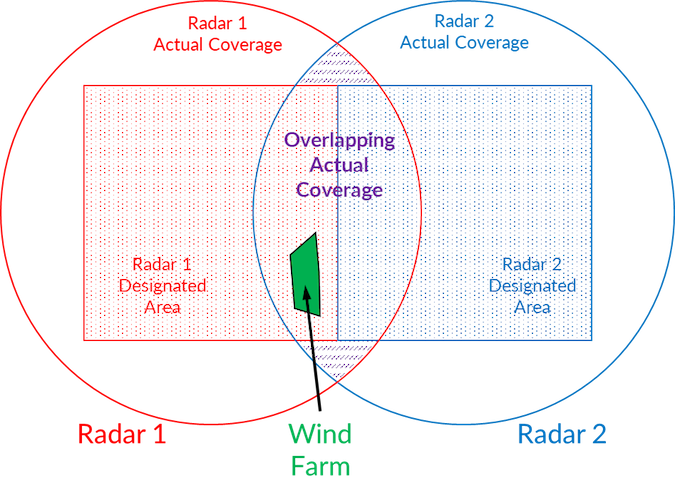 The designated areas typically correspond to zones of airspace and are smaller than the radars’ areas of actual coverage. In this scenario the requirement is for coverage from one, or more, radar. From the figure above it can be seen that the wind farm lies in the area of designated coverage for radar 1 and in areas of actual coverage for both radar 1 and radar 2 (overlapping coverage).

These charges can still be applied even if data from the mitigating radar is already being used by air traffic controllers at the wind farm location.

The radar data is real-time aircraft location information. Each data record consists of location coordinates, time and date. The data normally originates over land, from an aircraft being collected by a radar. The rights to the original data therefore lie with the landowner; the aircraft owner and/or the radar owner.

The land owner is at a commercial disadvantage in this situation because the radar operator could object to developments on the land thus making the land less valuable. Conversely the aircraft and radar owners benefit commercially from the radar data. The aircraft can fly with greater safety, speed and efficiency increasing revenue and profits. The radar operator can make money by selling air traffic control services to airlines and airports as well as by selling radar data to third parties.

There is no doubt that aircraft are allowed to fly above private land and that licensed operators are allowed to transmit radio signals over private land. The right of a private company to collect radar data is not established in the same way particularly if the collected data is being sold for a profit.

It appears, therefore, that it would be reasonable for a Scottish landowner to charge private radar operators for the right to collect commercially valuable radar data in their airspace above their land. This does not happen in practice.

It is not obvious which of these parties any Radar Data Costs should be paid to.

Before a wind farm operator agrees to pay Radar Data Costs there should be certainty that the contracting seller owns the radar data and has the right to sell it.

Should Radar Data Costs be paid?

There are other reasons to pay, however, including the fact that other mitigations solutions may be more expensive or that the radar may have been originally installed for wind farm radar mitigation with an expectation of recouping the radar’s development cost from other wind farm developers. Furthermore, paying for data from a particular radar source helps ensure that the radar will continue to provide data for the life of the wind farm.

How should Radar Data Costs be calculated?

There are no specific rules and regulations that specify how much wind farm developers should pay for radar data. In practice pricing is either based on the amount a radar owner charges an airport to use its data or by recouping the costs of a new radar installation on a per Megawatt basis.

When airports purchase radar data feeds they typically pay in excess of £100,000 per annum for the data and this same charge has been applied for wind farm radar mitigation on a per wind farm basis.

If payment were to be made on a per hectare basis then the annual charge would drop substantially. An airport typically provides a radar service to a range of 40 nautical miles which corresponds to an area of 1.7 million hectares which would mean the Radar Data Cost per hectare per annum would be around £0.07. Annual payments for a typical wind farm of 200 hectares would be £14 on this basis.

In some cases wind farm developers have purchased new radar to mitigate the impact of wind farms. In these cases they typically attempt to recover the costs of their investment on a one off per Megawatt basis. For example the owner a radar costing £6 million installed to mitigate a 300 Megawatt wind farm will have paid £20,000 per Megawatt.

Whilst paying the same rate as airports may appear to be a reasonable starting point it is not because wind farm mitigation solutions use much less data and because many wind farms may use mitigation data from the same radar. A substantially lower rate for wind farms could be considered reasonable.

Paying the owner of wind farm funded radar at the same, per Megawatt, basis as they have paid for the mitigating radar could be considered reasonable.

How are Radar Data Costs regulated?

In practice there is no authority that is likely to regulate, or intervene in a dispute regarding, Radar Data Costs.

Bodies that could take action include: The Energy Consents Unit in Scotland; The Department for Transport; The Civil Aviation Authority (CAA); Competition and Markets Authority and UK Competition Network.

In practice the only way of challenging the price would be through a planning appeal relating to the radar objection or the discharge of a radar planning condition.

Scottish landowners own the airspace above their land. In theory commercial radar operators could be charged a licence fee for collecting radar data in landowners’ airspace. Wind farm operators should ensure that contracting sellers own any radar data they are offering for sale.

In general it may not always be reasonable for wind farm operators to pay Radar Data Costs. In practice it may be necessary for them to do so to avoid the risk of not being able to build their wind farms due to radar objections.

Paying for radar data at the same rate as an airport is unreasonable because the amount of data required to mitigate a wind farm is much smaller than the amount required to provide air traffic control services at an airport. Paying at a substantially lower rate than an airport could be considered reasonable. Paying the owner of a wind farm funded radar at the same rate, per Megawatt, as they paid for the radar themselves could be considered reasonable.

In practice there is no authority that is likely to regulate Radar Data Costs and in reality the only way of contesting costs would be through a planning appeal.