Ever since mankind dragged their collective backsides out of the primordial soup and gazed up at the sky, the dream of someday flying through the air has endured. It probably occurred first when one of our ancient ancestors regarded some majestic bird passing overhead, its great wings skilfully keeping it aloft effortlessly streaking away towards the far horizon. The chances are that it wasn’t long after this that seagulls started stealing chips from wary passers by.

To fly like at a bird… let’s face it, most birds are brilliant at flying.

It is unheard of for instance to see an Arctic Tern carrying maps, travel sweets or even a tartan rug. Despite this apparent lack of travel essentials this remarkable creature migrates from the Arctic to the Antarctic… and back every year a round trip of up to 35 000 Km. This little traveller wends its way between its breeding grounds in Greenland in the north and the Weddell Sea on the shores of Antarctica in the far south, a lifetime spent in perpetual summer. It should also be noted that unlike certain species with ideas above their station our avine friends achieve flight all on their own, when marvelling at a mighty skein of geese flying overhead you will notice there is no ‘crew’ not even a middle aged pilot goose called Graham at the front of the V formation disturbing his traveling companions with arrival times and gate information.

Are we sure that there has always been this desire for flight? Well many of our oldest tales indicate that this must be true. One of the earliest stories involving the human desire to fly is the story of Icarus. This story fascinates people to this day as it contains both our collective desire to go beyond human boundaries but also some poor judgement when it came to choosing suitable adhesives for an aviation project. The tale deals with a shifty fellow called Daedalus who after he attempted to murder his apprentice was banished to the island of Crete by Athena Goddess of wisdom, war and posters. Once on the island Daedalus was charged by the king with the task of building a huge maze to contain the dreaded Minotaur a creature with the body of a man and the head of a bull. King Minos decreed that this vast labyrinth on the edge of town emanating mooing noises was to be kept top secret and as such imprisoned Daedalus and his son Icarus so as to safeguard its location.

Being a cunning chap Daedalus deduced that escape by either land or sea was impossible and so started collecting feathers and bee’s wax and when he had sufficient materials fashioned two pairs of wings and then called his son over for a chat.

D: “Icarus old son its time we were off.”

I: “That’s all very well Dad but we are locked in a cage and besides if we did get out the island is full of King Minos’ henchmen and a deranged cow / man hybrid”.

D: “Fear not, I have thought of that, we are going to fly out”

D: “I have made us both a pair of sturdy wings, just strap them to your arms! Though be careful not to fly too close to the sun”.

I: “I’m not sure your altitude based warnings are necessary Dad these wings look unlikely to satisfy the aerodynamic requirements to get us airborne”.

D: “Just strap them on you big Jessie”.

And so our intrepid heroes fly off into infamy, Icarus of course ignores the advice about the sun and plummets back to earth like a messy spinning candle leaving his heartbroken father to fly to Sicily where he doubtlessly enjoyed some delicious pasta and a cheeky glass of local wine. 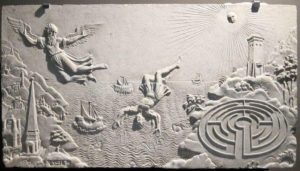 I hear the pedants cry that birds never mind Greek myth people were hardly the first things to fly, are we to ignore the skies of the late Jurassic period? Have you never seen ‘The Flintstones’? Pterodactyls were probably the first flyers I grant you, they were a type of pterosaur, flying reptiles not dinosaurs though they lived during the same period. The name of these creatures derives from the Greek pteron meaning wing or feather, from which we derive the word helicopter. I will not dwell on this subject any longer however as it all occurred long before breakfast in human evolutionary terms.

So when exactly did we transition from wistfully staring at our feathered friends to harnessing technology to soar? The answer when asking who or where first? Is very often China and it was indeed the Chinese who invented the aircraft in the form of manned kites more 2500 years ago. These large kites had a rope harness that could suspend a person and were used for a number of applications including military observation and more macabrely to execute people by dashing them to the floor from a great height. On his return from China Marco Polo told of how he had observed Chinese sailors tying a “fool or a drunk” to a kite when preparing for a long voyage. If the hapless victim became airborne it was considered good luck if he didn’t merchants would wait for a different ship to load their wares upon. Another significant early Chinese invention was a children’s toy the “Bamboo Copter” this utilised a bamboo rotor on a spindle rubbed between hands to achieve vertical lift off. 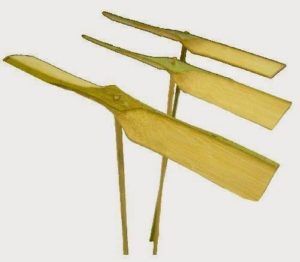 You would think the kites and copters would be enough but the Chinese were far from finished. Whilst Europeans were busy hitting each other with rocks and trying to get their heads around the new fangled craze for bronze the Chinese busied themselves with hot air balloons. These were admittedly not manned devices or even capable of lifting a mass greater than their own but more like the sky lanterns so beloved of the fire brigade today. It is thought they were first used (prepare for a shock) for military purposes namely scaring the bejesus out of one’s enemies.

For now we will leave the conquest of the air here. Look out in June for part 2 of ‘The History Of Flight’, including the exciting world of hot air balloons, dirigibles, gliders and powered flight.