The Department for Business, Energy & Industrial Strategy has recently published the Draft National Policy Statement for Renewable Energy Infrastructure (EN‑3), which sets out the primary policy for decisions by the Secretary of State for nationally significant renewable energy infrastructure.

In this article, we take a closer look at Section 2.52 of this document, which sets out the specific policy related to solar farms and glint and glare.

The ‘Applicant’s assessment’ section (2.52.2) sets out the requirement for a glint and glare assessment as part of a planning application. The text from this section is presented below:

In some instances, it may be necessary to seek a glint and glare assessment as part of the application. This may need to account for ‘tracking’ panels if they are proposed as these may cause differential diurnal and/or seasonal impacts. The potential for solar PV panels, frames and supports to have a combined reflective quality should be assessed. This assessment needs to consider the likely reflective capacity of all of the materials used in the construction of the solar PV farm.

The section states that a glint and glare assessment is necessary in some instances. Though it does not provide specific details, assessments are typically necessary within certain distances from, and potentially visible to, surrounding receptors. Pager Power has set out distances and circumstances in which glint and glare should be assessed for different receptors – see here.

The section also notes that the panel mounting system (fixed panels or tracking panels) should be assessed so that the results of the assessment accurately convey the solar reflections that will be caused by the solar farm. It is true that tracking panels produce glare under different scenarios compared to fixed panels.

Finally, it is stated that the assessment should consider the likely reflective capacity of all materials used in the construction of the solar farm. In Pager Power’s experience, the solar panels themselves are the overriding source of specular reflections which have the potential to cause significant impacts upon safety or amenity. In some cases, it is appropriate to consider glare produced by additional infrastructure associated with the development.

The ‘Mitigation’ section (2.52.3) sets out the mitigation requirement and recommended solution for mitigating impacts. The text from this section is presented below:

Applicants should consider using, and in some cases the Secretary of State may require, solar panels to be of a non-glare/ non-reflective type and the front face of the panels to comprise of (or be covered) with a non-reflective coating for the lifetime of the permission.

There are in fact other forms of mitigation that are available to developers, such as:

Solar PV panels are designed to absorb, not reflect, irradiation. However, the Secretary of State should assess the potential impact of glint and glare on nearby homes and motorists.

The statement that solar PV panels are designed to absorb light is often quoted and, though it is true, does not mean they are 100% effective in absorbing light. Specular reflections are therefore still possible if a shiny surface remains. Regardless, the section states that the potential impact on nearby homes and motorists should be considered; however, railway infrastructure and operations is notably absent.

The next part of the section states that the Secretary of State is unlikely to have to give any weight to claims of significant aviation issues because of glint and glare. The reasoning for this decision is based on the claim that there is no evidence that glint and glare from solar farms interferes in any way with aviation navigation or pilot and aircraft visibility or safety.

However, when solar panels were implemented at Manchester Boston Regional Airport, air traffic controllers were affected by the glare caused by the panels. As a result of the glare, tarps were temporarily draped over the troublesome panels before all panels were permanently orientated further east. The view of an air traffic controller viewing the solar development is presented in the figure below. 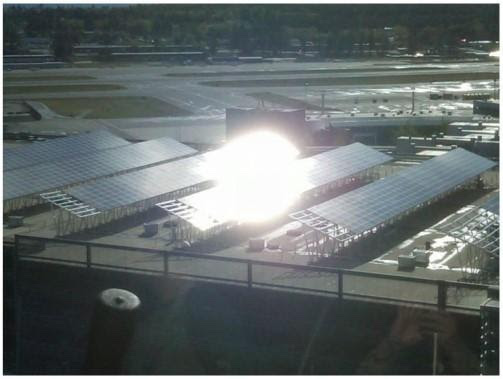 Additionally, Evaluation of the of Glare as a Hazard for General Aviation Pilots on Final Approach is a report produced by Sandia National Laboratories and sponsored by the Federal Aviation Administration (FAA) which simulated glare experienced by pilots to determine the impairment caused glare. The report concluded that the presence of glare was associated with the most impairment in the pilot’s ability to see their instruments and to fly their airplane.

Therefore, based on the evidence presented by real world cases and simulations, the statement that glare has no interference on aviation navigation or pilot and aircraft visibility or safety is proven to not factually incorrect. It is also unlikely that any aerodrome operator will follow this advice due to the necessity for strict safeguarding of their operations with respect to safety.

The policy document seems to provide an oversimplified view of the impacts of glint and glare from a solar farm, what should be considered when assessing glint and glare, and how significant impacts should be mitigated. This is surprising considering the document relates to national significant renewable energy infrastructure, which are typically large-scale, have a considerable impact on the surrounding environment and where, in our experience, glint and glare effects have come under a lot of scrutiny.

However, it is possibly signifying the intention of the government to reduce the obstacles for developing more large-scale renewable energy projects in the UK.