A solar development located on the western side of Pendleton, Oregon in the USA, has encountered reports of solar panel glare during its construction from motorists driving on the nearby Interstate 84[1].

The solar panels will cover a total of 58 acres and have a generative capacity of 6MW when it is completed. They are located on Airport Hill, to the north of Interstate 84 and south of Eastern Oregon Regional Airport. The project is expected to cost $15 million[2]. 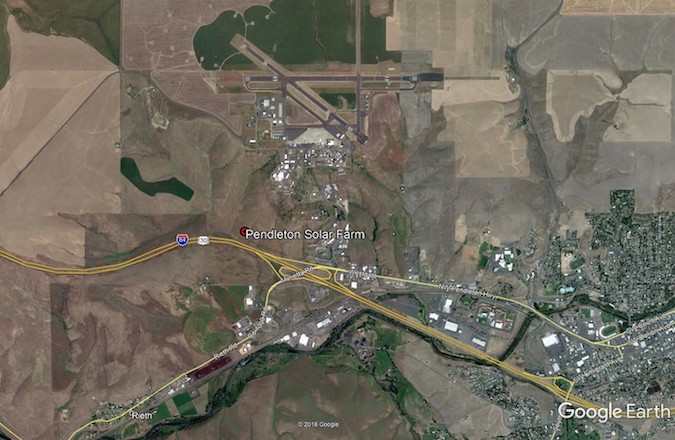 Reflected sunlight from the newly installed solar panels has been reported by road users. The solar development had passed the Federal Aviation Administration (FAA) assessment with respect to the nearby Eastern Oregon Regional Airport. It is believed that an assessment upon road users had also been completed. Reports however suggest that solar panel glare is causing a nuisance to east bound drivers in the early morning which in turn can lead to a safety hazard.

The developer has stated that they are 100% committed to ensuring safety with all their projects and is now working with a third-party consultant to assesses the intensity of the glare and its implication to take the appropriate mitigation measures.

Solar reflections which make a driver take action or reduce a driver’s capacity to see could become a safety hazard and therefore it is essential that further investigation is completed. Noticeable glare towards Interstate 84 will likely occur for particular months of the year and at a specific time. The most appropriate mitigation technique would be expected to be installation of screening to remove the solar panels from view of the road.

Do you know of any other cases where solar glare has been reported, either from a solar development, building or other structure? Please comment in the box below and let us know.