The COP26 United Nations Climate Change Conference, hosted by the UK in partnership with Italy, is taking place from 31st October to 12th November 2021, in the Scottish Event Campus (SEC) in Glasgow, UK. The two-week summit is a crucial move for climate change to be brought into necessary control for the entire world. 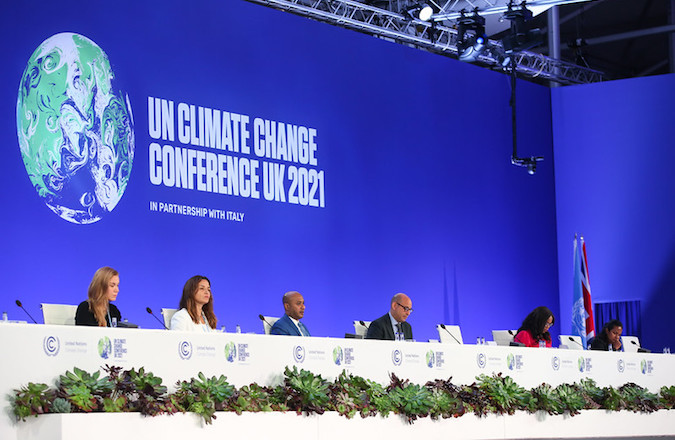 Last week, we discussed the importance of the COP26 and the predictions of what can be expected to come out of the event. With the COP26 event coming to an end this week, in this article, we are discussing the key outputs from the COP26 to date.

With the COP26 second week’s summit coming to a close, the main concern is the topic of “loss and damage” highlighted by the former US president Barack Obama, with the consensus on how to fund climate adaptation in the poorest and most imperilled nations. [1]

Thousands of climate activists have been marching through Glasgow as part of the organised event by Fridays for Future Scotland to demand action on climate change from leaders and politicians at COP26. The group forms young people, inspired by the activism of Greta Thunberg, a Swedish climate change activist, who marched from Kelvingrove Park to George Square [2]. The protest saw school-skipping pupils joining healthcare workers, activists and artists.

There have been many activists giving speeches during the rallies, including Greta Thunberg herself. During her speech, Greta branded the summit the “greenwash festival” and insisted that countries in the Northern Hemisphere were “still refusing to take drastic action on the climate” matter. Meanwhile in response to Greta’s speech, Rwanda’s environment minister, Jeanne d’Arc Mujawamariya stated that campaigners from wealthy Western countries are attacking climate solutions, such as carbon markets, which poorer countries see as economically vital. In response to Greta’s critique of trading carbon credits (one of the most divisive topics at the COP26 climate talks, Jeanne said: “They’re just complaining just for complaining.” [4]

An Ugandan activist, Vanessa Nakate, also addressed the thousands of climate protesters at the Glasgow George Square, stating that her country is witnessing the impacts of the climate crisis first hand: “People are dying, children are dropping out of school, people’s farms are being destroyed.” As well as in Glasgow, protests took place across London, and around the world, demanding for a swifter action to combat the global climate crisis. In Glasgow alone, up to 50,000 people showed up for the march towards the end of the first week of the summit.

Various pledges have been already confirmed, many of which by the UK government, including:

One of the most impressive and anticipated pledges has been towards deforestation, for which over 100 leaders have promised to put an end to, and reverse deforestation by 2030 during the COP26 summit’s first major deal.

The countries which have signed the pledge include:

An impressive number of pledges have been made in support of this cause, including governments of 28 countries committing to remove deforestation from the global trade of food and other agricultural products, such as palm oil, soya and cocoa. Another great example has come from more than 30 of the world’s biggest financial companies (including Aviva, Schroders and Aza), which promised to end investment in activities linked to deforestation.

The pledge includes almost £14 billion of public and private funds, some of which will be going towards developing countries to restore damaged land, tackle wildfires and support indigenous communities [7]. A further £1.1 billion fund will be established to protect the world’s second-largest tropical rainforest; in the Congo Basin.

As previously mentioned, the former US president Barack Obama made his statements during the COP26 summit, addressing that while the pledges made so far represent “real progress” if they are followed through, “not enough” has been done to avert warming of more than 1.5C, which is the target. The current US president, Joe Biden, also spoke during the COP26 summit, warning that “in an age where this pandemic has made so painfully clear that no nation can wall itself off from borderless threats, we know that none of us can escape the worst that’s yet to come if we fail to seize this moment.” [5]

Meanwhile, the former US vice-president, Al Gore (who served two terms as vice president under Bill Clinton), gave a really powerful speech at the global legislators’ summit at the Scottish parliament, outlining the following:

While many politicians are currently gathered at the COP26 summit, discussing how to save the planet, many cities around the world are suffering from extremely bad air pollution, including:

There have been many impressive pledges made so far as a result of the COP26 summit, including ending deforestation, cutting methane emission levels by 30% by 2030, and new commitments to phase out coal power, it is hard to tell how effective and reliable those will be. The success of the summit will be judged on whether countries and companies can keep the 1.5 degrees Celsius goal alive; the critically important temperature threshold which refers to the aspirational target of the landmark 2015 Paris Agreement. [9]

While the efforts of those within the COP26 summit have been relatively impressive, there has been a lot of critique from the public, especially from the climate activists, in terms of the ways in which many attendees of the COP26 event have arrived to Glasgow. The reports claim that:

While it’s understandable that security measures must be in place, and time constraint matters do occur, the climate crisis needs to be taken seriously and be seen as a priority by all.