London, one of the largest, diverse and exciting cities, hosts more than 16,000 solar photovoltaic (PV) panels [1] on its roofs! However, London has still a long way to go in order to meet its true solar potential. A 2011 study by the Environmental Committee of Greater London Authority (GLA) indicated that over 20% of London’s electricity needs could come from Solar PV energy [2].

Table 1 below shows the results of the 2011 GLA study [3] compared to estimates from the Department of Energy and Climate Change (DECC).

Table 1: London’s potential to meet part of its electricity demand from solar energy

The DECC method estimated London’s potential by taking into account the following:

The GLA method estimated London’s potential by taking into account the following:

You can read the full study here… Overall it appears that London could cover approximately 20% of its electricity needs by installing photovoltaic panels on its roofs. However, what are the potential benefits of 20% of London’s electricity coming from solar panels?

The Benefits of Increasing the Number of Rooftop with Solar Panels

Let’s have a look at two interesting examples rooftop solar panels in London; the Blackfriars’s Bridge and BedZed.

Solarcentury installed over 4,400 solar photovoltaic panels on the bridge’s new roof.  Over 6,000 m2 of PV panels provide 50% of the station’s energy needs whilst saving 450,000 kg of CO2 per year [5]. Blackfriars is now the largest solar powered bridge in the world. Luckily the son of Pager Power Chairman, Mike Watson, took a good picture of the solar panels installed on the Blackfriars’ Bridge when visiting the Shard. You can see the solar panels in the picture below. 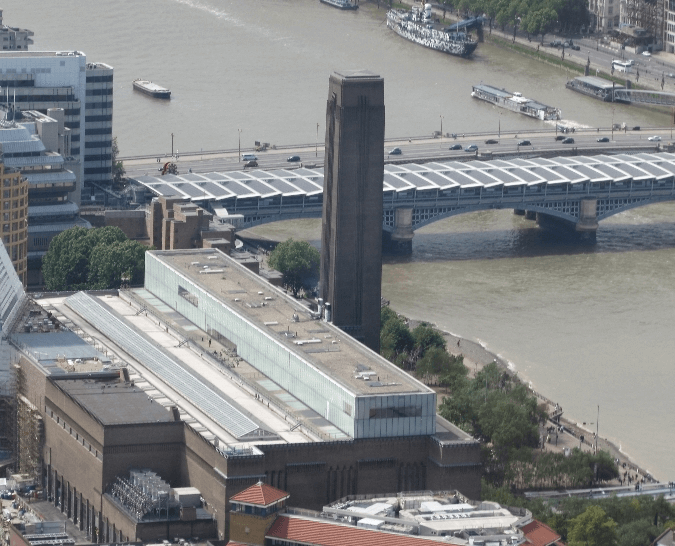 An animated aerial view of the rooftop solar panels can be seen in figure 2 below.

Figure 3: An aerial view of the solar panels covering the Blackfriars Bridge in London

It is obvious an increased number of rooftop solar panels have benefits for London & Londoners. Let’s not forget that other countries like France have  recently passed laws to increase the number of commercial rooftops having solar panels. There are thousands of commercial and non-commercial buildings with unexploited roofs which could produce cheap and green energy. Of course there are environmental and other constraints, but when planned properly, nuisance from reflections or other environmental effects could be minimised and solar panels could co-exist with the rest of urban infrastructure.

We installed solar panels on our roof in 2012 and we have no regrets. Hopefully other companies will do the same.

[4] Commercial rooftop solar could be the key to preventing business black-outs, by Tim Purbrick of Solar Power Portal. (Last accessed 14/08/2015).