Renewable energy in the Arabian Peninsula

Renewable energy in the Arabian Peninsula

Historically the peninsula relied on hydrocarbons resources to push the development. Oil and gas contributed for both export and domestic usage. The exports are the main contributors of the peninsula’s GDP, while, when used as fuel, can provide inexpensive electricity for the domestic demand. However, several countries have recently committed to diversify their energy portfolio shifting towards renewable energy. 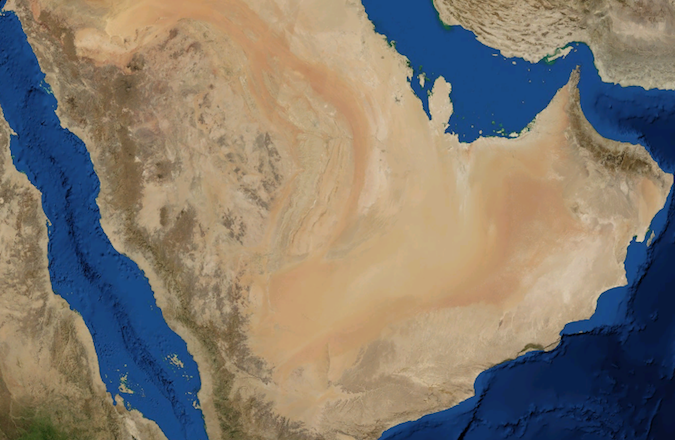 As expected, the prominent resource of the Arab Peninsula is solar. However, some countries such as Kuwait, Oman and Saudi Arabia have areas with good wind resource.

The solar resource is extremely suitable for photovoltaic plants, particularly in the north-western and central regions of Saudi Arabia and the southwestern region of Oman. Bahrain, Kuwait, Qatar and the UAE also have high global horizontal irradiance (GHI). Overall, considering the solar resource and other factors, more than 600GW can be developed from just the 1% of the total suitable area.

The wind resource can be a profitable solution for certain areas such as the centre and north of Saudi Arabia, the southern region of Oman and the western region of Kuwait. In these areas the wind speed recorded is above 7.5m/s at heights of 100m. Overall, considering the wind resource and other factors, more than 20GW can be developed from just the 1% of the total suitable area.

The UAE, has already built several solar power projects (amounting to the 65% of the total installed solar PV capacity of the peninsula) which have been delivered without subsidies and at a lower LCOE cost compared to hydrocarbons. In regards of wind projects Kuwait has already built its first wind farm while Oman and Saudi Arabia have both project under construction. However, the current shares of electricity produced by renewable energy sources are extremely low accounting only for a 0.6% of the total capacity.

The countries have pledged to increase this share in the next years:

Most of the new renewable capacity added will be composed by Solar PV (81%) while wind projects will account for 9% and CSP 10%, the overall renewable planned addition will total a 6732MW an increase of almost 6000MW from 2018 [2].

Countries in the Arabian Peninsula have committed to invest into renewable energy projects, to reduce oil dependence, to have a better security from volatile prices of oil and drive their plan for economic expansion. Several projects have been awarded in the latest auction and many other will be awarded in the future. Pager Power has already worked on projects in that area (UAE and Oman), as well as Jordan, and it has a good experience in glint and glare and telecommunication interference assessments. Their expertise can help developers in assessing such issue in future projects.