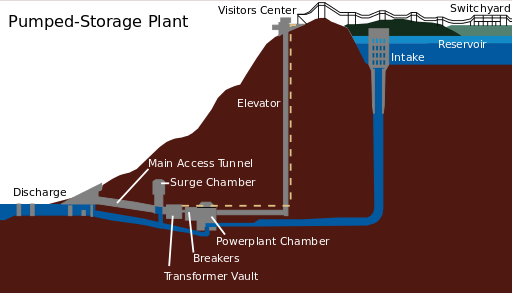 Why Do We Need Pumped Storage?

Electricity needs to be available at all times with demand for it varying continuously through the day. Supply of electricity comes from multiple generators which can be intermittent and have limited reliability and flexibility. Pumped storage makes the overall electricity system more reliable by soaking up excess electricity and providing additional electricity thus matching the potential mismatch between supply and demand.

Whilst Pump Storage schemes only relinquish around three quarters of the energy they consume cumulatively they make a country’s electricity system more efficient and reliable.

This means that the mismatches in demand and supply are set to significantly widen as carbon-emitting generation is replaced with carbon free generation. This means the requirement for Pumped Storage is set to increase worldwide.

Other methods for managing the national mismatch between electricity demand and supply include batteries, demand side management and interconnectors. Battery storage systems can be relatively expensive but are more efficient and respond more quickly than Pumped Storage systems. They can also be located where electricity is used rather than where there are big lakes.

Interconnectors allow electricity to be moved from countries with surplus electricity with those that have deficiencies. There are significant power flows (mostly into) the United Kingdom from Norway, Netherlands, Belgium, France and Ireland.

Cruachan II will be able to generate up to 600 Megawatts (around 2% of UK electricity demand) and store up to 7.2 GigaWatthours (GWh) (around 1% of UK daily demand). The scheme will be adjacent to the existing Cruachan station that pumps water from Loch Awe to an upper reservoir at Ben Cruachan. The pumps and generators will be housed within an new man-made cavern in the mountainside.

Pumped Storage Around the World

Ireland has a pump storage facility at Turlough Hill in the Wicklow mountains which has a capacity of 292 Megawatts having become fully operational in 1974. South Africa’s Ingula Pumped Storage scheme (previously known as Braamhoek) has a capacity of 1,332 Megawatts and became operational in 2017. Ingula is located in KZN province north of Ladysmith.

Pumped Storage is an old technology which needs to be expanded to allow electricity generation worldwide to be carbon free. It is necessary for electricity markets and planning systems to be structured to enable new Pumped Storage development. Without more Pumped Storage carbon-free electricity is likely to be wasted in future.

Have Yourself a Merry Little Eco-friendly Christmas