Why is the safeguarding for London City Airport different to other airports?

Why is the safeguarding for London City Airport different to other airports?

London City Airport does not follow the standard UK and International physical safeguarding rules for tall buildings. Instead, custom rules have been put in place in order to facilitate the co-existence of tall buildings and safe flying.

Flight safety in the vicinity of airports can be compromised due to the presence of tall buildings. Thus, airports are safeguarding their airspace against tall structures to ensure flight safety. Depending on the airport and its operations, certain safeguarding criteria apply. These are usually in the form of three dimensional imaginary surfaces called Obstacle Limitation Surfaces (OLS).

London: A City of Tall Buildings

London is a city of tall buildings. There are currently over 40 constructed buildings with heights exceeding 100m. Additionally, at least 10 buildings with planned heights over 100m are under construction and due to be completed in the next 2 years.

London City Airport is the only London airport that is actually located within Inner London. It opened in October 1987 and had to co-exist with existing and future tall buildings in its vicinity. As a result of this, the airport was designed as a Short Take-Off and Landing Airport (Stolport) 1 and was licensed subject to custom OLS which consider its proximity to the City of London, Canary Wharf and other tall developments. The custom OLS for London City airport can be seen in figure 2 below [1]. 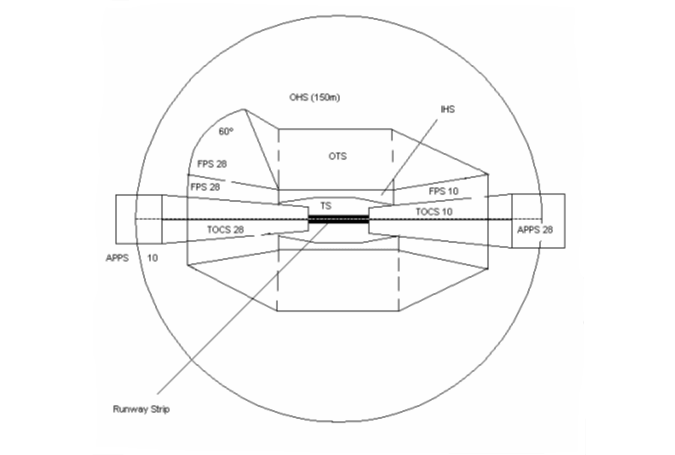 The safeguarding area extends to 10km from the mid-point of the runway.

Pager Power Pager Power undertakes aviation risk assessments. Please contact us if you are planning a significant development in the vicinity of an airport.