Unknown drones have been sighted at Gatwick Airport. As a result the airport has been closed causing huge disruption to travellers in the run up to Christmas. At the time of writing the airport is still closed and neither the drones or their operators have been found. 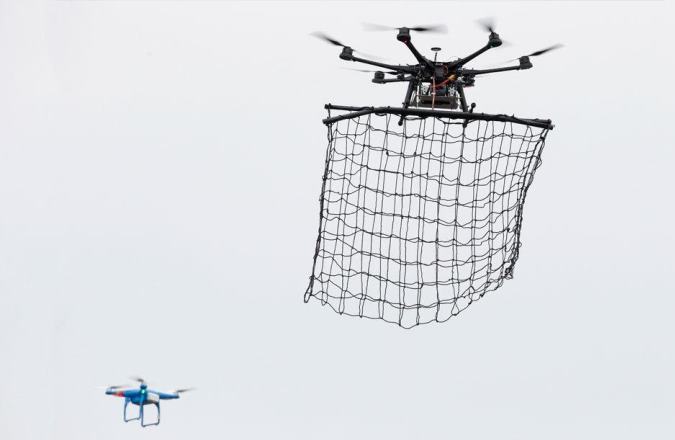 Figure 1 Using a drone to catch a drone

How are drones controlled?

Typically drones are controlled remotely using radio signals. They can also be pre-programmed to fly specific trajectories at specific times. Technologies available mean the drone operator does not necessarily need to be close to the drone.

Most drones are battery powered and can typically fly for up to 30 minutes without recharging.

What is the Risk?

A drone that collides with an aircraft can cause significant damage to the wind screen or engines. For smaller drones (less than 1 kilogram) the impacts are similar to collision risk with birds – these risks being tolerable to an extent. Rarely wind screens are broken or engines fail.

Bird risk is acceptable but managed with bird concentrations being managed in the vicinity of airports. When considering accidental collisions Drone risk and bird risk are similar.

There are differences though – the main ones (1) being that drone sales are growing rapidly and (2) drones can be flown near airports intentionally for either malicious or mischievous reasons. The first means that drone risk is increasing year on year and the second means an increased level of risk as the degree to which drones can be controlled improves.

How do airports respond to drones?

The response depends on a variety of factors such as the size of the drone, how often it has been seen and whether there are known malicious intentions. Some tend to close as a precaution as soon as a drone is reported and others continue to operate unless a credible threat has been clearly identified.

Operators of “rogue” drones near airports are rarely identified and prosecuted.

Is the Gatwick Response Over The Top?

The following need to be considered: