Safeguarding an airport has many facets. For aerodrome safeguarding, it is common to assess and manage, where possible, the use of drones, new and existing habitats and the heights of surrounding development to name just a few. A safeguarding officer will have to manage both external planning applications as well as proposed internal development, with the ultimate aim of internal development to increase safety and expand the airport. This means more flights, more passengers and better infrastructure to accommodate those passengers.

To increase passenger numbers, there will have to be improvements to transport infrastructure. The vast majority of passengers will travel to an airport by car[1],[2]. More vehicles means more car parks to accommodate those left for the duration of a person’s trip. Due to the reflective nature of many of the materials present on a car, glint and glare assessments for proposed car parks are becoming a more frequent request. This article presents a brief overview of why concerns have emerged, and the modelling processed involved. 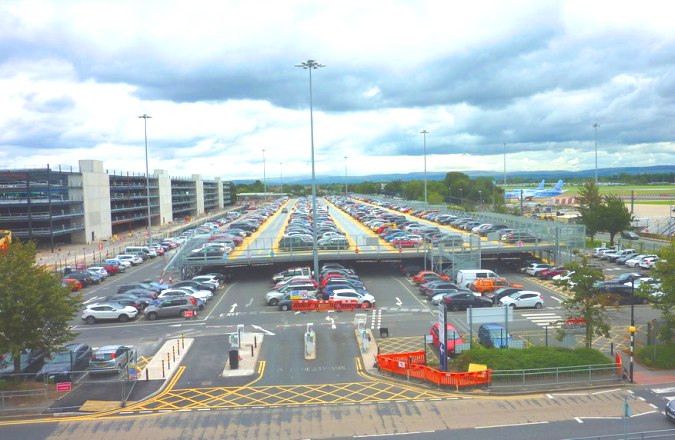 It is likely that the safeguarding concerns for car parks have arisen from the safeguarding requirements for solar photovoltaic developments. More information regarding solar PV glare can be found in the second edition of our glint and glare guidance here. Cars comprise many reflective surfaces, some of which will be more reflective than solar panels, however they will be less uniform throughout a site area. Large areas of parked vehicles will however still have the potential to create a large area of reflectors capable of producing specular reflections.

Assessing a car park for glint and glare is a complex process. A vehicle, such as a car, can be orientated in many different ways when parked within a car park. The reflectors of interest (typically body panelling and the front and rear windscreen) will need to be considered and assumptions will need to be made. Similar to a glint and glare assessment for a solar photovoltaic developments, the modelled reflectors require assessment against the ATC Tower and approach paths. In some instances, additional receptors such as the visual circuit require assessment.

Consideration of the Analysis Results

[1] A majority (81%) of adults who had flown from a UK airport in the last 12 months said that last time they had travelled to the airport by private transport (car/van or taxi/minicab). This proportion has fallen from 87% in 2010 and 90% in 2006. Public experiences of and attitudes towards air travel: 2014. Statistical Release 23 July 2014. Department for transport.