Volcanic eruptions cool the atmosphere because they cause a haze in the Earth’s upper atmosphere. This haze disperses sunlight away from our planet and effectively cools the Earth.

Man-made carbon dioxide emissions are increasing the Earth’s temperature and are set to continue to do so. It may be possible to reverse this heating effect by injecting Sulphur into the atmosphere.

This is controversial for a multitude of reasons – Sulphur is nasty stuff; Carbon emissions are harming our oceans and need to be stopped anyway; Atmospheric sulphur injections are likely to change precipitation patterns and who gets to control the Earth’s temperature.

There are some potential benefits – the technique is relatively easy to implement and cheaper than cutting carbon emissions; the technique can be switched on and off relatively easily and the Earth’s temperature is predicted to respond in months rather than over many years. 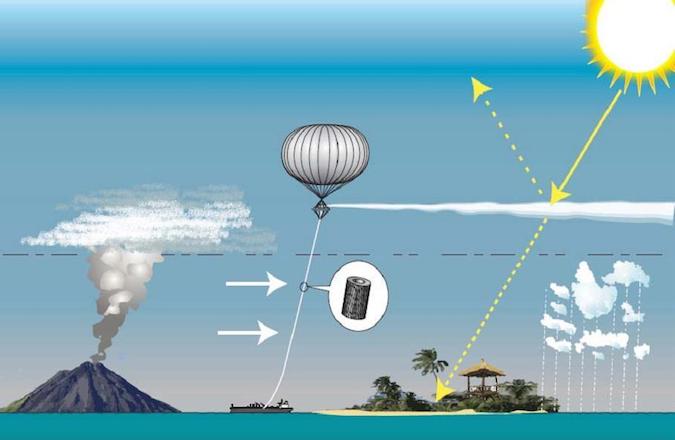 Sulphur particles cause microscopic water droplets which are suspended in the upper atmosphere. These droplets re-radiate solar energy away from Earth thus reducing the amount the Sun heats the Earth increasing the overall reflectivity (or Albedo) of the Earth.

Only a small amount of Sulphur is needed to have a significant cooling effect. It is estimated that a 2% increase in the Earth’s reflectivity would roughly halve the effect of Carbon Dioxide levels doubling.

The requirement to mitigate climate change is estimated to be 250,000 tonnes of sulphur per year. This is small (less than 0.001%) compared to Earth’s annual emissions of 38 billion tonnes of carbon dioxide.

Supporters of this mitigation argue that it can be implemented progressively with levels of injected Sulphur increasing progressively year on year. If there are unacceptable adverse effects then injections can be scaled back or stopped.

Sulphur needs to be dispersed as small particles at high altitude to create the necessary microscopic aerosol water droplets which will reflect sufficient levels of sunlight. Proposed delivery mechanisms include balloon suspended pipes or aircraft flying at high altitude.

The cost of mitigating man-made carbon emissions is estimated to be in the region of 10 billion dollars per year.

Mikhail Budyko suggested, in 1974, we could cool down the planet by burning Sulphur in the stratosphere – with the resulting haze reflecting sunlight away from the Earth. A leading proponent now is David Keith a professor of applied physics at Harvard University. Whilst Keith is not an advocate of implementing this mitigation he is an advocate of researching it further.

People are generally averse to “tinkering” with our planet’s ecosystem – especially if this is to fix man-made problems that should be solved by other means.

Whilst it is clearly too soon to be injecting large quantities of Sulphur into the atmosphere to prevent global warming we should be researching this further.