Global temperatures are predicted to increase by around 2 to 5 Celsius by the year 2100. The exact increase is unknown due to complexities of modelling and the level of action to reduce greenhouse gas emissions[1]. What is certain is that the frequency and severity of extreme weather events is increasing significantly. Carbon dioxide is arguably the most significant gas contributing to climate changes with current annual global emissions of 33 Gigatonnes[2] from manmade processes.

There are many mitigating techniques for reducing carbon dioxide emissions and consequently mitigating the effects of climate change. These include:

The world is struggling to meet the challenge of reducing carbon emissions enough to eliminate the risk of severe climate change. This means that all of these mitigation techniques are necessary – although individuals may prefer some and have concerns about others.

For carbon capture and storage to be effective the carbon dioxide must be stored permanently so that it is not re-emitted at a later date. This is achieved by pumping the gas into porous subterranean rock which is capped by a hard impervious rock. The gas displaces, or is absorbed by, saline water that is already in the rock. 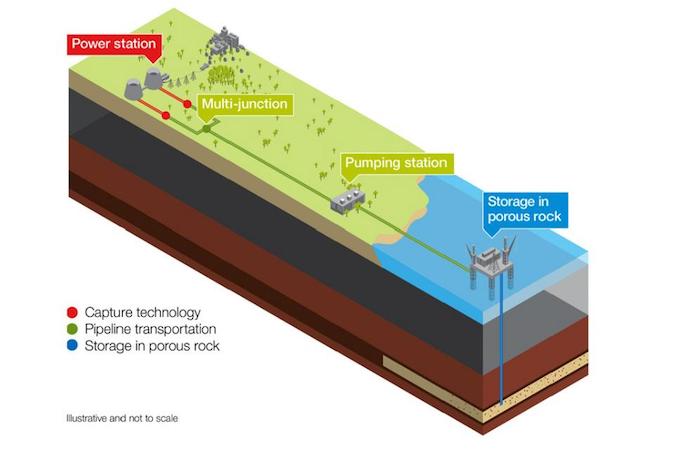 A typical CCS system involves capturing carbon dioxide from a large industrial process (such as a thermal power station); piping it to a geologically suitable storage site and then pumping it down into the porous rock.  Specific concerns relating to this technology include:

There are four inter-related trapping mechanisms that ensure that the injected gas does not escape. These are referred to as structural trapping; residual trapping; solubility trapping and mineral trapping. These mechanisms operate on different timescales ensuring increasing storage security over time[3].

The Carbon Capture and Storage Association estimates that CCS costs are currently between 60 and 90 Euro per tonne of carbon dioxide stored.  This means that the cost for storing carbon emitted from coal and gas burning power stations is approximately £40 per MegawattHour.

There is a huge amount of storage capacity available worldwide – not all of it is easily accessible however. The global CCS institute identifies storage resources of 6,990 Gigatonnes worldwide – which is equivalent to around 200 years emissions.

The CCS industry has been accused of existing so that coal generation can continue without the need for renewable electricity sources. CCS cannot be justified in this context – however (1) there are many other processes that emit large volumes of carbon dioxide and (2) thermal generation can be more flexible than either renewables or nuclear generation.

CCS cannot replace renewables but can nevertheless be an important part of a diverse energy mix structured to mitigate climate change.