The UK Department for Transport (DfT) has released an update to the 2010 Public Safety Zone (PSZ) circular [1] (now referred to as a ‘policy’). The update [2] has simplified the approach to defining the zones, however the new PSZ dimensions may now affect properties or proposed developments that were previously not within a PSZ, and now lie within one. The policy change will affect the 32 UK airports that currently have PSZs, developers and planners, as well as possibly residents and tenants (both commercial and residential). The policy means all airports with over 18,000 commercial air traffic movements (ATMs) a year will have to re-design their PSZs to ensure they are in keeping with the new policy. This article defines the new PSZ criteria, summarises the key changes to the PSZ guidance, states the new criteria and discusses the implications upon airports and PSZs across the UK.

What is a PSZ?

A Public Safety Zone is formed at either end of a runway to protect people against aircraft accidents. They are typically applied to commercial airports that have a particular number of ATMs where extra steps to safeguard the public are deemed a requirement. The area surrounding the ends of the runway are deemed to be at highest risk of experiencing an aviation accident because these areas have the highest concentration of aircraft movements and it is where aircraft are nearest the ground on take-off or landing (or still on it in some circumstances). This high risk area however may extend over land which is not owned by the airport.

The PSZ is formed of two areas (or risk contours, as they are specifically defined within the policy). The smaller risk contour is defined as the area with the highest risk of experiencing an aviation accident within it. The larger area is where the risk is lower but still significant in terms of safeguarding people on the ground. These contours are specifically described by their risk ratio; these are 1:10,000 and 1:100,000. These numbers relate to the statistical analysis of an aircraft accident occurring within a given area,  where the risk has been calculated to be 1 in every 10,000 years in the highest risk area, and 1 in every 100,000 years in the lower risk area.

The overall aim of the policy remains the same between 2010 and 2021 i.e. to ensure there is no increase in the number of people living, working and congregating within the PSZ and, where the situation allows it, reduce this number over time.

The new policy introduces new PSZ definitions for the 1:10,000 contour and the 1:100,000 risk contour. The definitions are as follows:

The new policy changes how each of these contours are defined, changing from an individual risk-based approach for each airport based on the aircraft that operate there, to a universal design that can be applied more simply across the board. Previously, the dimensions of the PSZ were defined using specific risk data for each airport based on the aircraft it typically had land there, and the risk of accident associated with those aircraft (based on real-world data). The calculation for defining the size of the PSZ risk areas was a ‘black box’, and there was no freely available specific methodology for calculating the size of the risk contours. The new policy simplifies this approach by applying a simple set of rules, where the size of the PSZ is defined by the number of commercial air traffic movements at the airport per year.

Figure 1 [3] below shows a diagram of how the new risk contours are defined around a runway at an airport that has over 18,000 ATMs per year. 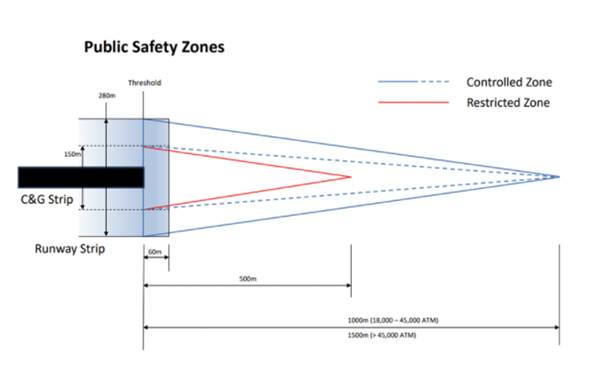 Previously the highest risk area could be defined by a zone that extended both in front of and behind the runway threshold (see figure 2 – blue area). The new definition of this area has the zone only extend away from the runway threshold, in the form of an isosceles triangle. The lower risk area is defined by a larger isosceles triangle which encompasses the highest risk area. The overall shape of the lower risk contour is comparable between the previous 2010 circular and the new 2021 policy.

The length of the PSZ contours is defined by the following:

Regardless of the number of commercial ATMs per year, the higher risk PSRZ is defined as 500m from the runway threshold.

The width of the base of the PSRZ is 75m either side of the threshold point regardless of the number of ATMs. The same is applicable for the PSCZ which has a base of 140m.

Whilst the PSZs will now be defined using a ‘one size fits all’ approach, the CAA did acknowledge that this will cover the vast majority of all known incident locations during the consultation phase in 2020 consultation proposed [4]:

‘The proposed standardised shape, to replace the risk-based model profile, will capture 90-95% of accidents shown to be located outside the aerodrome boundary.’

What Can be Built in a PSZ Under the New Policy?

The rules which define what can and cannot be built within both the 1:10,000 and 1:100,000 contour remain broadly the same between the 2010 and 2021 policy. The change does however mean that there will likely be more critical developments that fall within the higher risk 1:10,000 contour and this will need to be reviewed by airports, LPAs and developers. This is particularly important because airports will be required to offer to purchase existing developments that would not otherwise be permissible if newly proposed within this contour. However, as before, the owner of the development is not obligated to sell.

An example of how the new criteria have changed the dimensions of a PSZ  is presented below with respect to London City Airport. Figure 2 [5] below shows the previous PSZ for the western PSZ at London City Airport, as per the 2010 circular. The blue area shows the higher risk area (now known as the PSRZ) and the red area shows the lower risk area (now known as the PSCZ).

Figure 2 shows a PSRZ that does not extend over land outside of the airport’s control – it also extends backwards behind the runway threshold. The width of both the PSRZ and the PSCZ (the base of the triangle) is also similar to the width of the runway and runway strip. The length of the PSRZ is just over 2.1km.

Figure 3 [6] below shows the new PSZ for London City Airport based on the 2021 policy with respect to runway 09 [7]. The blue area shows the PSRZ and the red area shows PSCZ. 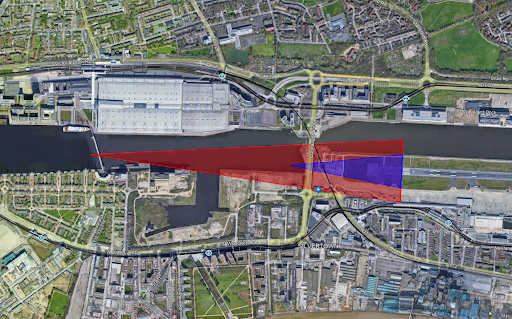 Comparing the two, it is clear that the lower risk 1:100,000 contour is now shorter in length but wider than the previous 2010 zone modelled. The 1:10,000 contour is now longer and extends only in front of the runway threshold (from the perspective of a departing pilot).

The updated guidance changes the methodology for defining the PSZ from a unique risk-based approach which varies for each airport, to a universally defined zone which varies only based on the number of ATMs at the airport per year.

What can and cannot be located within a PSZ remains the same as stated within the 2010 circular. The only difference is that the dimensions are now more easily definable. The changes will however affect what can be built around an airport, and also the existing development and uses which now fall within a risk contour, especially the 1:10,000 contour. The next review of the PSZ criteria is set for 10 years time.

Airports are required to produce PSZ maps for safeguarding purposes. These should be readily available to local planning authorities so that they can be shared as required. Pager Power can assist with this process by producing the map alongside a full document detailing the relevant guidance and processes. This would then be suitable for a local planning authority to distribute.

If you require a PSZ map and report to be produced for your airport, or have any questions about PSZs or the implications of this change, please get in touch.