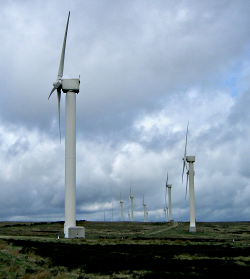 The 15 turbine Tormywheel wind farm has planning approval but has not been built because no acceptable solution for mitigating its effects on NATS radar has been identified. The 5 turbine Red Gap Moor scheme has not been built due to delays in certifying an agreed radar mitigation solution at Durham Tees Valley airport.

The 152 turbine Clyde wind farm was built but generation was delayed due to the NATS Lowther Hill radar. This resulted in lost generation, radar trial costs and the unplanned purchase of a new radar at Cumbernauld. Unplanned purchases of new air defence radar have also been necessary for other UK onshore and offshore wind farms.

Two turbines near East Midlands airport have yet to start generating electricity whilst a new mitigation solution is implemented – even though the airport’s own turbines continue to generate electricity.

The operator of a small 5kW wind turbine in west Wales was instructed to stop operation due to potential impact on unmanned aerial vehicle (UAV) flights. This arose due to a lack of consultation by the local planning authority. This turbine is now operational following an appeal where Pager Power provided expert evidence.

Wind farm developers in South Africa often obtain permission to build but have an obligation to resolve any radar interference issues that arise – failure to mitigate can result in wind farm shutdown.

What should an investor take into account when considering wind farm radar risk?

Radar mitigation solutions may not happen, may be delayed, may not work and may increase in cost. This causes significant financial risk to wind farms at all project stages. Investors in wind projects should consider the following:

Pager Power has over 10 years’ experience working on 24% of operational UK wind farms and has a proven mitigation track record. This includes the successful design of the Whitelee radar mitigation solution using the Kincardine radar. If there is a project that the company can help on,