Have you ever been on a flight and looked around at the empty seats, and thought what the carbon cost per person might be? 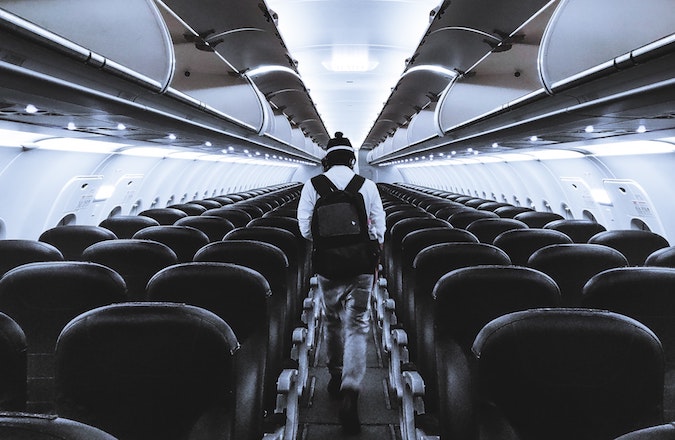 Many people may have come across this situation in personal or business travel, and the problem extends beyond what you might first think. The Civil Aviation Authority (CAA) in the UK have data about the number of ‘ghost flights’ that are departing the UK to international destinations. These are flights that are operating at less than 10% capacity. The most recently obtained figure by The Guardian, through a freedom of information request, was approximately 500 flights per month between October and December 2021 [2]. The top five airports operating these ghost flights to international destinations were:

Previous figures indicated that around 15,000 ghost flights left the UK for international destinations from March 2020 to September 2021 [3]. This has largely been attributed to the COVID-19 pandemic. There is a system at busy airports which enforces airlines to run at least 80% of their flights to retain their landing slots. This means that airlines might feel pressured to run flights which are empty or almost empty just to meet that standard. In fact, German airline Lufthansa spoke out against the practice in January 2022, expressing that they wanted to cancel 33,000 flights in total, but after finding it would lose some of its take-off and landing spots, planned to still fly 18,000 “unnecessary” flights by March 2022 to retain them [4]. This is a staggering number for such a short period for one airline only, and one can only imagine the figures that would come out if all airlines came forward with their numbers.

British Airways, Virgin Atlantic and easyJet told The Guardian that they did not operate ghost flights to retain slots, but refused to provide data on the occupancy of their flights. A spokesperson for Virgin Atlantic said: “Covid-19 had an unprecedented impact on customer demand, with wide-ranging global restrictions that limited international travel. For three months during 2020, Virgin Atlantic did not operate any passenger flights. Any lower-occupancy flights that operated outside of this window were not ‘ghost flights’ – they supported the global movement of people including returning foreign citizens and repatriated UK citizens.”

This is perhaps an example of the type of system that airports should be looking to review in line with environmental needs. In fact, this rule was suspended during the pandemic, so the operation of so many ghost flights during that period, in spite of the change, suggests a much deeper lying problem. It has been re-established at 50% since October 2021.

The Department for Transport said: “We acted swiftly [during the pandemic] to prevent empty aircraft needing to fly to retain their slots, however some flights may operate with low passenger numbers for a whole range of reasons, including carrying key workers or vital cargo.”

Airlines UK, the trade body for UK-registered airlines, said: “The [CAA] figures reflect two things – refreshed travel restrictions to combat the Omicron variant, leading to flights from destinations like Morocco and the far east bringing UK travellers home. Passenger aircraft have also been widely used as freighters during the pandemic, and even though these flights are carrying essential freight and supplies, including PPE, they would be inaccurately classed as ‘ghost flights’ in this analysis.” It is a valid point that the figure without context could give a false picture of the number of ghost flights being operated.

Potentially an even greater concern is that the true number of ghost flights remains hidden as this data is only known by the airlines. The real number should include domestic flights as well as international, and ideally we should have the data for travel throughout the world to really grasp a handle on how big this issue is. The Guardian have asked airlines for this data but have not yet been able to obtain it. Some MPs are calling for a government review into ghost flights, which might be the best way to get closer to the true figures.

Flying is one of the most carbon-polluting activities and therefore a major contributor towards the current climate crisis. However, it could also be considered a necessary evil in many cases. The world is in many ways a better place for the connectivity and cross border possibilities that flying has created. It is unlikely that flying would ever completely stop, and nor should it really, because the pros often outweigh the cons.

However, for the sake of the environment, the inefficiencies in the current flying system must be dealt with. The issue of ghost flights is not the only one that needs to be investigated but just one example. A possible strategy to combat the problem could include legislation written into aviation law to say that a flight with less than a certain capacity is not allowed to fly, unless in certain exceptional circumstances. The landing slots rule should also be kept an eye on and not exploited.