Solar Photovoltaic (PV) panels are designed to absorb sun rays and produce electricity. However, sometimes they can cause solar reflections usually described by the term Glint and Glare which can be of concern to the aviation community (i.e. pilots and air traffic control personnel), road users, residents, train signals, and other receptors.

However, over the last year there have been concerns regarding the PV reflections from a different form of solar developments. These are usually called thermal solar parks and utilise solar reflections to concentrate sun rays and produce electricity.

Solar thermal parks rely upon mirrors which follow the path of the sun throughout the day. These intentionally reflect and concentrate sun rays towards towers containing water filled boilers which power turbines to produce electricity.

There are more than 3GW of such solar parks globally. Countries which currently operate or construct such solar parks include the USA, Spain, Germany, Italy, Algeria, Egypt, Iran, Turkey, Morocco, Israel, India, South Africa, China, Thailand,  and Australia among other [1]. An example of a solar thermal park in Australia can be seen in the video below which include a flight over the park where solar reflections can be seen in the below video by 100pcRenewables:

The most famous and largest solar thermal park in the world today is the Ivanpah Solar Park in California, USA which over the last few months has been on the news due its solar reflection effects and complaints from pilots.

Located in the Mohave Desert of California, USA, the Ivanpah Solar Park and has been operational for less than a year. It has a net power production of 372 MW and serves on average 140,000 homes per year [2]. The mirrors/panels are concentrated in a circular manner reflecting and concentrating the sun rays to three towers which have a height of 500 feet each (figure 1 below). 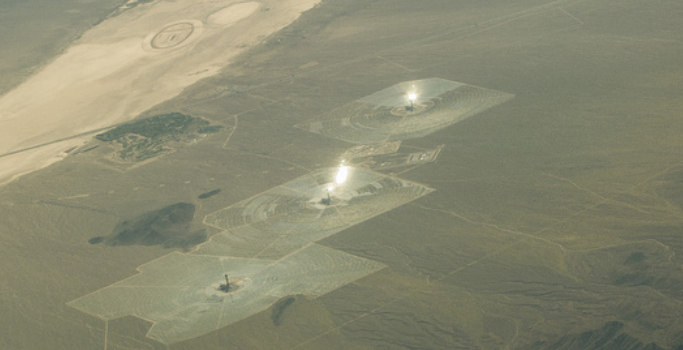 There have been official complaints to the Federal Aviation Administration (FAA) regarding PV reflections from the Ivanpah Solar Park. Pilots have mentioned that the brightness levels are like looking into the sun and that the reflections pose a hazard to flying safety [3]. 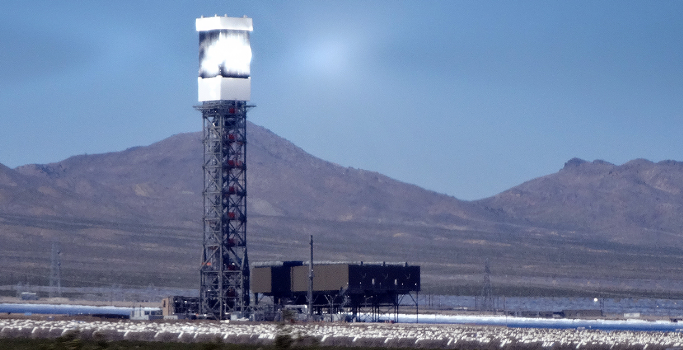 The main difference between these solar thermal developments and the common PV panels is that the latter are designed to absorb sun rays and not reflect them; hence the Glint and Glare effects from solar thermal parks are expected to be significantly more when compared to PV panels.

And the answer is?

It appears that the Solar Thermal Parks can produce solar reflections because of their towers and mirrors.

In the next few years the global operational capacity of solar thermal parks is expected to double form 3GW to over 6GW. The sheer size of these developments, coupled with the intended solar ray reflection, means that being proactive and assessing the effects of Glint and Glare on aviation activity (and perhaps other receptors depending on the location) at early planning stages is the best way to manage such effects.