There are lots of mechanisms that could reasonably be factored into a process for determining an ‘acceptable’ amount of glare. These include:

Other factors pertaining to the context of any glare could be incorporated as well, for example:

All of the above are defensible as grounds for assessing impact significance, and none of them are bullet-proof. Notwithstanding this, Sandia Laboratories developed the ‘Solar Glare Hazard Analysis Tool (SGHAT), which became the gold standard of glare assessment for solar panels in the USA and across the Atlantic.

SGHAT used to be freely available, however it is now restricted to government and military users. The SGHAT modelling approach remains the most recognisable and is frequently requested by stakeholders, particularly in the aviation world.

The calculation methodology that goes into the SGHAT model is not discussed at length here. What is most important is the metric for deciding what is acceptable and what is not. The model was built specifically for solar developments near airports, with standards set for pilots on final approach within two miles of the runway threshold and personnel in an Air Traffic Control tower.

The two quantities that determine a pass/fail are:

These two parameters are combined. A reflection that has a large angular size has a lower acceptable intensity than a reflection with a small angular size. Figure 1 shows how the results are evaluated. 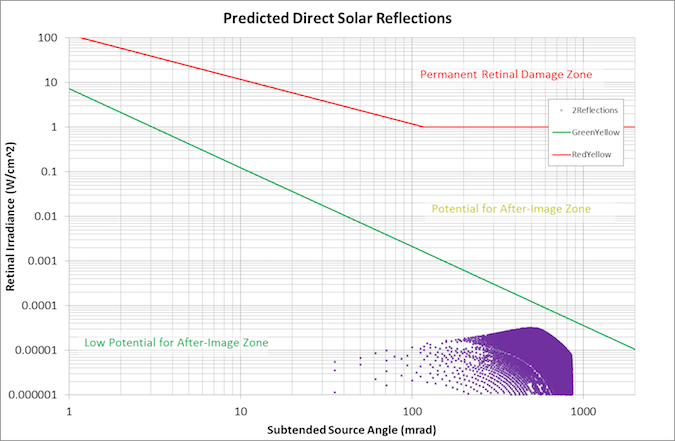 The calculation considers the direction an observer is facing (designed for approaching pilots – the model assumes that an air traffic controller could be staring straight at the reflector).

There are three zones within the SGHAT approach. Reflections below the green line have a ‘low potential for a temporary after-image’. This is considered acceptable for pilots on final approach.

SGHAT itself has been taken away, but all is not lost. The SGHAT methodology is still in use and is available from Pager Power. In addition, it is worthwhile assessing the context of reflections beyond the parameters within the SGHAT model, some of which have been discussed within this article.

This is because other factors can affect the real-world impact, and can improve the likelihood of new developments coexisting safely with existing infrastructure.

If you have any queries or upcoming projects, please feel free to contact the Pager Power team to discuss, or take a look at our glint and glare guidance document.