Sheep and Solar, a Match Made in Heaven

Sheep and Solar, a Match Made in Heaven

You herd it here first, the land that makes an optimal area for livestock is often also an ideal spot for solar farms. They’re both vast, rather flat plots of land which receive ample levels of sun. Increased solar production benefits the environment, but it may come at the expense of agriculture production. That is why there is a growing appeal in discovering ways to bring together the solar and agricultural worlds.

Bring Out The Sheep!

Some farmers are opting to flock together with solar producers to gain the maximum benefits of the land. The solar producers pay farmers to ship their sheep over to their operations, and the sheep tend to the weeds and other plants, stopping them from growing to the point they block the sun from reaching the panels. It’s a win-win-win situation; the sheep get fed, the farmers get paid and the solar producers don’t have to use mowers or weed whackers to keep the vegetation under control. 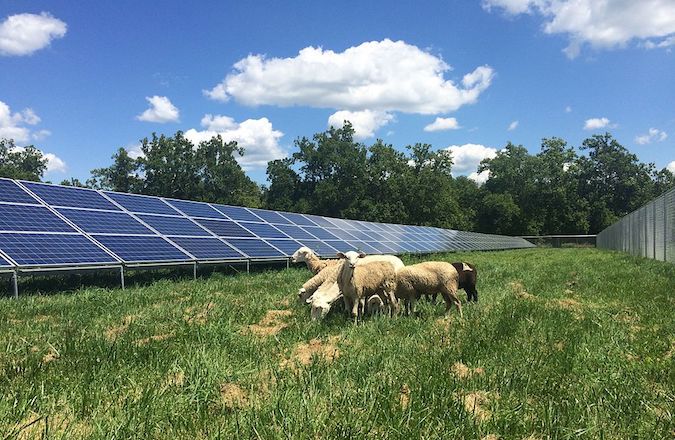 In 2014, The Building Research Establishment (BRE) published the “Agricultural Good Practice Guidance for Solar Farms” which describes experience and principles of good practice for the management of small livestock in solar farms. The document quotes sheep grazing as being one of the main livestock utilised in “Solar Grazing” and boasts the benefits of:

Although the benefits are high, some are not so welcoming of the idea.

Are They Pulling The Wool Over Our Eyes?

Fields that formerly grew wheat, barley, and other crops are now being converted to harvest sunshine across the UK. It’s not unexpected that the topic is dividing the countryside. Developers are currently targeting around 11,000MW of new ground-mounted solar panels, which will double the current capacity. To put that into perspective, every MW of energy requires roughly three to four acres of solar panels, meaning that the current target would see 40,000 acres of land covered. As a result, there is debate among farmers about whether this is the best long-term use of land. Martin Lines, who grows cereal crops in Cambridgeshire argues that “there is no focus around long term food security or meeting the needs of UK citizens from our landscape.”

What’s Happening Across The Pond?

Between 2019 and 2020, Oregon State University in the USA conducted a study into the use of lamb grazing and solar energy production on the same land. Findings included:

The report states that the overall return is roughly the same, and that doesn’t consider the energy that is being produced by the solar panels.

There are arguments to be made, both for and against the influx of agricultural land being transformed into solar farms. But with the rise in “Solar Grazing”, hopefully landowners won’t be so sheepish.

Over 200 Glint and Glare Assessments completed and counting…