Large Solar PV developments cause direct solar reflections which can affect aircraft, trains, road vehicles and residential amenity. Pager Power has undertaken over 250 glint and glare assessments which explain the times, dates and durations of expected glare. Glare which is expected to cause a temporary after-image is classified as “Yellow”. Mike Watson is currently researching methods of eliminating “Yellow” glare from solar PV developments so that the developments can proceed without causing significant interference.

For aeronautical glint and glare assessments levels are calculated in terms of impact on the eye in accordance with the table below:

Under US Federal Aviation Administration (FAA) requirements red and yellow glare is unacceptable for the last 2 miles of runway approaches. This means that solar schemes near airports sometimes have to be reengineered so that they do not cause yellow glare. 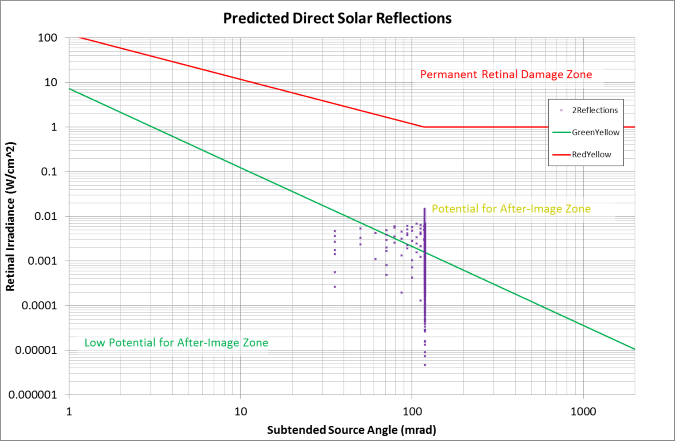 There are many factors that could potentially affect the glare level. These include:

Where yellow glare is predicted it can often be eliminated on an ad-hoc basis. This may often be achieved by changing the orientation of some panels or by changing the panel surface type. The modelling tool accommodates surfaces with varying smoothness and anti-reflective coating (ARC).

A base model was developed with a specimen solar panel and observer scenario in Richmond, south west London. The annual glint and glare was then made for this scenario. 27 alternate scenarios were then developed by changing a single parameter at a time (e.g. slope or distance between observer and solar development). A tool was then built for comparing the results. Example output from the comparison tool is shown below:

As a result of the research undertaken so far Pager Power has: