Solar panels are now a common source of renewable energy generation and becoming a common part of urban landscapes. They can range from a large-scale solar farm to a few solar panels on the roof of a bungalow, for example. How solar panels look might change in the future though, and this article focuses in particular on novel shaped solar panels that have been investigated by a group of scientists from an international research group [1]. The research was funded by the Deanship of Scientific Research at King Khalid University in Saudi Arabia.

The group of scientists have been considering the hypothetical performance of pyramidal, hexagonal, and conical shapes for solar panels. In particular the potential thermal performance, power output and efficiency have been compared. One of the advantages that such a shape would give is that some part of the shape would always be facing towards the sun, and so in some cases the requirement for tracking systems may be removed [2]. Another advantage is the greater surface area available for solar panel coverage, meaning that such a solar panel could have the same lateral area as a traditional solar panel that is twice the size area-wise. In the article, it is also explained that the novel solar panels may be particularly suitable for use in regions near the equator as homogenous (uniform) sunlight may hit all lateral surfaces of the vertical structure.

In terms of the comparison between the different shapes, the thermal performance is particularly interesting. When solar panels heat up, they can lose photovoltaic efficiency and so cooling is important. This means on a hot day they tend to perform worse, which may be surprising. There is a lot of research going into the innovation of cooling systems around traditional solar panels to improve their efficiency on hotter days. In the case of these novel-shaped panels, a cooling system based on forced air circulation has been proposed, where the air enters from a trapdoor on the bottom side of the panel and exits from a trapdoor at the top of the shape. See the schematic below taken from the journal article: 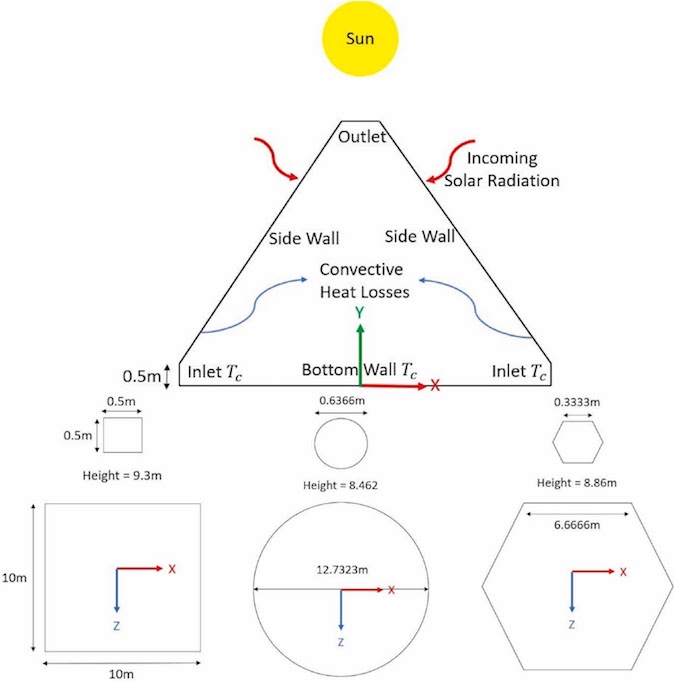 Figure 1: Schematic of the geometrical properties of the three shapes (pyramid, hexagonal and conical) considered for PV solar panels. [1]

The scientists found that the conical-shaped panels gave the best thermal performance, based on measurement of the minimum back-side temperature.  The temperature difference was greatest between the conical-shaped and pyramid-shaped solar panels (around 10.9 degrees Celsius). In the article it is explained that the thermal performance is largely due to the heat transfer coefficient of the shape, which depends on the geometrical properties of the surface and the flow characteristics. The conical panels also showed between 5 and 8% better efficiency, and a higher power output than the other shapes.

Out of the three novel shapes researched in this study, the conical-shaped panels have emerged as the option with the best thermal performance, efficiency, and power output. Further work has been suggested to investigate the effect of adding internal grooves on the conical shaped panels, and the effect of the use of a phase change material (capable of storing thermal energy) on the temperature distribution of the panels.

The full article can be found at:

Over 150 Glint and Glare Assessments Completed: 5 things we have learned